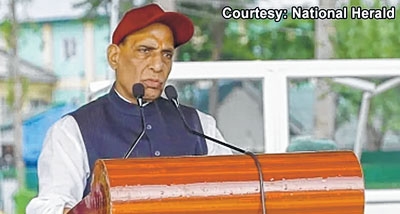 NEW DELHI, Apr 17 : While at least eight States have been rocked by the massive protests over the Agnipath scheme by the Centre, Union Home Minister Amit Shah and Finance Minister Nirmala Sitharaman thanked Prime Minister Narendra Modi for the military recruitment scheme. Defence Minister Rajnath Singh said that the recruitment process would begin soon.
The Centre on June 14 unveiled the Agnipath scheme - a new short-term recruitment policy for Indian youth to serve in the armed forces. The scheme aimed to allow youngsters aged 17.5 to 21 to be inducted into any of the three services of the military as “Agniveers” for a period of four years. However, in a one-time waiver, the Central government on Thursday increased the upper age limit for the Agnipath scheme from 21 to 23 years.
While thanking the PM, Amit Shah wrote on Twitter that the recruitment process in the army was affected due to the pandemic, so the Prime Minister gave a two-year concession.
The Home Minister said, "A large number of youth will be benefited by this decision and through Agneepath scheme, they will move forward in the direction of service to the country and their bright future. Thank you Modi ji."
Finance Minister Nirmala Sitharaman also praised the PM for the Agnipath scheme. "This decision will help our youth who had lost out on opportunities to serve the nation due to the pandemic. Grateful for this timely and caring decision PM...," she said.
Meanwhile, over 200 trains were affected on Friday due to the protests against the Agnipath scheme. Angry mobs targeted trains and railway property in their protests.
In Telangana, one person died while 13 were injured in the protests at Secunderabad, while a passenger died after complaining of uneasiness due to train fire incidents in Bihar's Lakhisarai. The protestors also vandalised Bihar Deputy CM Renu Devi's house.
Besides, Section 144 has been imposed and internet services suspended in Haryana, while in Uttarakhand, highways were jammed after protests erupted in Haldwani. Buses were set ablaze on Yamuna Expressway near Aligarh's Tappal. In Bengal, protestors sat on a dharma to demand the withdrawal of the scheme.
India Today