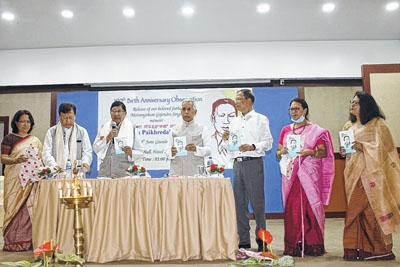 By Our Staff Reporter
IMPHAL, Jun 19: A memoir titled "Yangna Paikhredako Punshi" was released today  to commemorate the 100th birth anniversary of Moirangthem Gojendro, former Secretary of Manipur Assembly.
The book release cum birth anniversary observance event was held at Sangai Hall, Hotel Imphal located in North AOC.
It is worth noting that the memoir is a compilation of Moirangthem Gojendro's diary entries put together by his family.
"Yangna Paikhredako Punshi" was officially released by veteran politician Okram Joy and former Member of Parliament T Meinya alongside the family of M Gojendro.
Speaking to media persons, Gojendro's son and IAS Officer M Lakshmikumar shared that the memoir details his father's experiences pre and post independence. It paints a great picture of Manipuri society of that time as well as the lifestyle and economic condition of the people, he added.
He also stated that the memoir had been compiled based on the belief that people might learn something from details of the past as revealed in the book.
During the event, family members, friends and well wishers paid  a floral tribute to the portrait of late Moirangthem Gojendro.
It may be noted that Moirangthem Gojendro who hails from Uripok Gopalji Leirak worked for Manipur Government in various capacities and played a vital role in the Scout Movement and Polo Movement in the State.