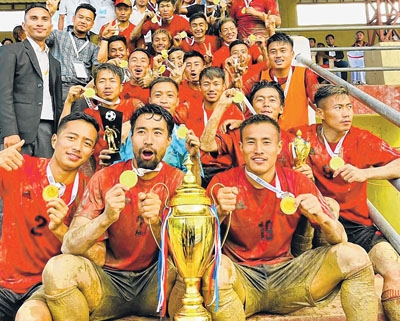 By Our Staff Reporter
IMPHAL, Jun 19 : Tangkhul Katamnao Saklong were crowned champions of the inaugural edition of the ANSAM Martyrs' Trophy Football Tournament organised by All Naga Students' Association of Manipur (ANSAM) in collaboration with NSUC and DSA Chandel at Sports Complex, Chandel Christian.
Tangkhul Katamnao Saklong (TKS) defeated Lamkang Kurchuknao Kunpun (LKK) 3-0 in a one sided title clash of the 16 team knock-out tournament today to walk away Rs 1,20,000 richer. TKS produced a commanding performance from the beginning and were ahead just five minutes into the game with Thangvah Ragui finding the back of the LKK net.
Wungngayam then converted a fine chance in the 30th minute to hand TKS a comfortable 2-0 lead as LKK who overwhelmed Sirti Thiimjiitam  Sourkhe (STS) 5-1 yesterday in the semi-final match were kept on toes with a barrage of attacks.
With the comfortable lead, TKS rested back for a major portion of the half and concentrated more in defending their lead before Thomyo L further solidified the team's lead with a clinical finish in the 67th minute.
As LKK's effort to reduce margin did not yield any result, TKS walked home 3-0 to fetch the top honour.
Runners up LKK were feted with a cash prize of Rs 70,000 as Poumai NTM got fair play team award worth Rs 10,000.
Besides these, top scorer of the tournament, Renghon of LKK; best players, Thangvah Ragui of TKS and best goalkeeper, Tara Gachuiwo of TKS were also felicitated.