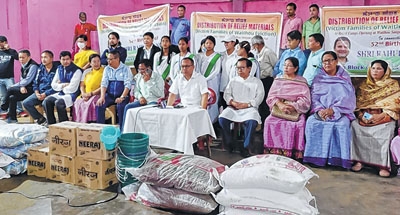 By Our Staff Reporter
IMPHAL, Jun 19: The Manipur Pradesh Congress Committee (MPCC) today provided relief materials to people who have been taking shelter in relief camps after their houses were demolished in the course of the State Government’s eviction drive.
With the help of Lilong Block Congress Committee and Wangkhem Block Congress Committee, the MPCC distributed 20 bags of rice, 10 bags of dal, four bags of potato, two bags of onion, three bags of common salt, two bags of chilli, five cartons of cooking oil, two water tanks of 500 litre capacity, buckets and mugs to the people who are now taking shelter in relief camps.
MPCC president K Meghachandra said that around 15 families of the 60 families evicted by the Government were in possession of pattas.
The patta holders were also evicted along with the  others 24 hours after they were served a notice, he said.
The MPCC president said that they were providing some relief materials on the occasion of the 52nd birthday of AICC leader Rahul Gandhi so as to mitigate the trauma and despair being suffered by the evicted families to some extent.
Expressing keen desire for the Government to extend some kind of assistance to all the families whose houses had been demolished, Meghachandra said that the Government ought to provide some materials needed for survival even though the rights of patta holders had been violated blatantly.
Although a few Amins/Mandals have been suspended for allotting pattas fraudulently, the allottees are all innocent, he claimed.
Asserting that the allottees should be given their rights, the MPCC president maintained that they should be given compensation.
It would not be right for the Government to victimise innocent people for the wrongs committed by its officials/employees, he said.
The Government should provide land and construct houses for all those people who have been evicted and whose houses have been demolished, he added.