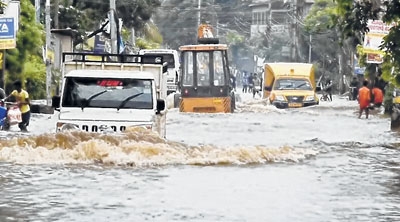 GUWAHATI, Jun 19
At least out of the eight recent deaths, three were buried alive due to a landslide, and six died in the floods. Recent deaths have been reported from the districts of Darang, Barpeta, Karimganj, Haila-kandi and Sonitpur. Floods and landslides have conti-nued to wreak havoc in almost 90 percent of Assam as heavy rainfall continues for the fifth consecutive day.
So far, 62 people had died due to flood and associated calamities in Assam while over 30 lakh people in 4,291 villages have been affected across 32 districts.
A boat carrying the flood-affected people in Hojai district capsized, with three children missing and 21 people rescued. The Deputy Commissioner of Hojai has said that search operations are going on to trace the three kids.
Prime Minister Narendra Modi tweeted that he had spoken to Assam Chief Minister Himanta Biswa Sarma and had taken stock of the situation.
The PM wrote on Twitter, "Assured all possible support from the Centre. I pray for the safety and well-being of the people of Assam affected by flooding," as reported by News18. The Assam CM, who visited several relief camps housing the affected people, thanked him.
He had reviewed the flood-affected area of Rangia in the Kamrup district, along with relief camps at Fatima Convent School and Kolajal. He also inspected the situation with the State BJP chief and local MLA Bhabesh Kalita. He wrote on Twitter that PM Modi had called to check up on the situation.
He tweeted, "Very kind of you to have called to take an update on the relief and rehabilitation work in flood-affected areas of Assam. We are closely monitoring the situation and providing best help to people."
The CM said that the district administration was prepared to face any sort of emergency and urgent need. He informed that the officials have been ordered to ensure evacuation of affected people to relief camps and that the army is also ready to provide help if the Deputy Commissioners ask them for it.
He added that the State Disaster Response Force (SDRF) and National Disaster Response Force (NDRF) officers were helping in the evacuation, as reported by The Indian Express. Sarma ensured that the inmates of all the relief camps were being assisted with proper measures.
Around 373 relief camps across the States are currently housing more than 1.08 lakh people. Landslides have been reported in several areas of Guwahati, along with parts of Karimganj, Cacher, Goalpara, Hailakandi, Dima Hasao, South Salmara and Kamprup.
The Indian Meteorological Department (IMD) has also issued an orange alert for both Assam and Meghalaya, which have also been severely affected by floods, for June 19 and 20. The Central Water Commission (CWC) released a bulletin on the morning of June 19 that rivers like the Brahmaputra at Neamatighat, Jorhat, Tezpur, Sonitpur, at Dhubri; Manas at NH Road Crossing, Barpeta; Beki at Road Bridge, Barpeta; Jia- Bharali at NT Road Crossing, Sonitpur; Kopili at Dharamtul, Nagaon; Puthimati at NH Road Crossing, Kamrup; Pagladia at NT Road Crossing, Nalbari; Barak at BP Ghat Karimganj and Kushiyara at Karimganj are flowing above the danger level. Kopili at Kampur, Nagaon is flowing above the High Flood Level.
Meanwhile, fear of scarcity of essential commodities made the situation further worse in Cachar district. Landlocked, as both train and road were closed for an indefinite period, people of Barak Valley were prompted for panic buying.
Though DC Jalli tried to convince people that adequate stock of essential commodities was there, but the vegetable wholesale market had a different story to tell.
Barak Valley procures maximum vegetables from Kharupetia, Barpeta Mairabari and Shillong etc.
Due to massive landslides on Jowai Badarpur road on Wednesday, road transport came to a complete halt for the last four days.
At least ten truck carrying minimum 12 tonnes of vegetables reach Silchar market daily to meet the demand. For the last four days, not a single consignment could reach Silchar.
Wholesale traders are now trying to procure vegetables from Teliamura and Pencharthal of neighbouring Tripura. Jalli on Saturday said, the district had adequate stock of Bengal potatoes.
Agencies