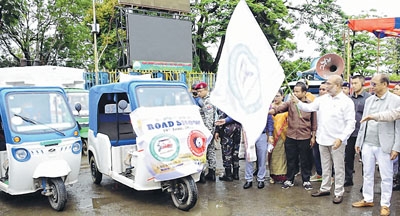 Imphal,  Jun 19 (DIPR)
Chief Minister N Biren Singh today flagged off a roadshow, organised by E-Rickshaw Workers’ Union Manipur, from Kangla, Western Gate.
The roadshow was aimed at making Imphal City free from hazardous emission, particulate matter and all forms of pollutants and mitigate climate change and global warming.
Speaking at the occasion, N Biren underscored the importance of the programme as mitigating climate change and global warming is the need of the hour.
He stressed the need for voluntary involvement of everyone in conserving the environment by planting trees and using e-vehicles, among others.
He continued that many people in the State had started using e-vehicles to control air and noise pollution. As such,  the Govern- ment has been trying to set up charging points for the same at different places across the State so as to promote use of pollution free vehicles, he added.
“Mother nature doesn’t need us, rather we need nature for our survival”, stated the Chief Minister and continued that the State Govern- ment has been carrying out mass campaigns against deforestation and pollution of various rivers.
The Government carried out eviction drives against only those structures which were illegally built at reserved forest areas and along riversides. The Government has no enmity with anyone, he added.
He maintained that the Government would provide every possible support to e-rickshaw workers and would also request banks to provide loans to those who want to start e-rickshaw service.
He also appealed to the public to act responsibly and take their part in conserving the environment.
Further, he expressed his solidarity to the uncertainties faced by the people of Assam and Meghalaya due to widespread flood and landslides.
Municipal Administration, Housing & Urban Development (MAHUD) Minister Y Khemchand stated that though the economic condition of the State has improved, the youth are still facing unemployment problems.
Starting of e-rickshaw service would not only help in controlling pollution but also provide employment for living.
He assured that the State Government would provide every possible support to the e-rickshaw workers.
Advisor, E-Rickshaw Workers’ Union, Manipur A Premkumar Singh and members of the union also attended the programme, among others.