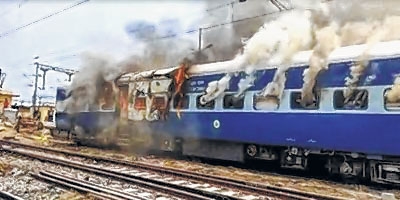 New Delhi, Jun 19
Protests against Agnipath, the Centre’s new recruitment scheme for the armed forces, continued for the third consecutive day, spreading to States such as Punjab and Kerala that were until now untouched by the violence.
PTI quoted officials as saying that the Railways cancelled 369 trains on Saturday due to the agitation, including 210 mail/express trains and 159 local passenger trains.
Mobs set ablaze Taregana railway station in Bihar during a bandh on Saturday and vandalised Ludhiana railway station in Punjab, as protesters continued to target rail- way properties on the fourth day of the stir and blocked roads and railway tracks in several States including West Bengal, Haryana, Rajasthan, Odisha and Uttar Pradesh.
Uttar Pradesh saw pitched protests with instances of arson and stone pelting in several eastern districts. As many as 269 protesters have been arrested over the last two days, with 168 of them booked on charges of breach of peace.
In Jaunpur, protesters damaged roadways, buses and parked private vehicles in the Lala Bazaar area. Agitators also set fire to a bus and two police motorcycles.
In Telangana, police and protesters clashed in Waran-gal during the funeral procession of Damira Ra-kesh, who was killed when police opened fire at protesters at Secunderabad railway station on Friday. On Saturday, protesters tried to divert the funeral procession towards Warangal station and clashed with police as they prevented them. Police also detained A Subba Rao, who runs a coaching centre at Guntur to prepare aspirants seeking to join the defence services, on suspicion that he allegedly instigated youths to attack the Secunderabad railway station on Friday.
In Patna and its outskirts, bandh supporters were restrained by police from forcing shops to down their shutters, but they hurled stones and set fire to Tare-gana railway station in Masaurhi sub-division and a jeep belonging to the railway police, PTI reported. There was also cross-firing and journalists covering the clash were assaulted.
BJP-ruled Haryana witnessed more trouble as protesters set fire to a vehicle outside Mahendragarh railway station. A protest was also held in Sonipat, where a large number of youths blocked the Rohtak-Panipat National highway.
Punjab witnessed its first day of protests, with youths vandalising railway property at Ludhiana station and a number of protesters gathering at Jalandhar’s PAP chowk to protest against the Agneepath scheme.
Demanding rollback of the scheme, protesters, who damaged window panes, tic-ket counters at Ludhiana station, told police officers who tried to pacify them that it had been nearly two years since the Army recruitment exams were held.
In Kerala’s Thiruvanan-thapuram, around 300 pro- testers took out a march to Raj Bhavan; in Kozhikode, around 500 youths marched to the railway station. Both protests were peaceful.
In Jammu, Youth Congress workers came out to the streets in support of the protesting Army aspirants, demanding a rollback of the Agnipath scheme. Courtesy The Indian Express