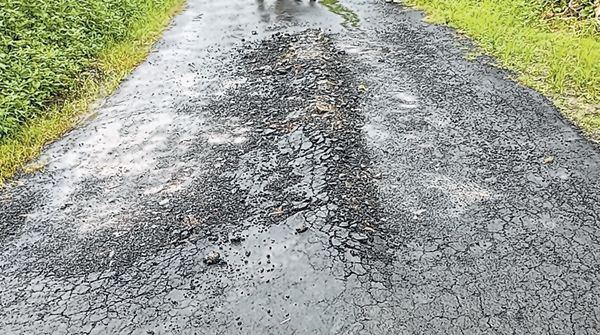 By Our Staff Reporter
IMPHAL, Jun 20 : Poor quality of black topping along the Inter Village Road (IVR) constructed at Kangjang and Chakha village in Senapati district under PMGSY has invited the ire of dissatisfied locals.
Reportedly, this IVR is the sole connecting road between the two aforementioned villages which are located 57 kilometres away from Maram.
Speaking to media persons, PT Khomuibo, chairman, Chakha village shared that the IVR had been constructed around 5 months ago through an initiative led by the local MLA under  PMGSY.
The chairman informed that a few months after construction was completed, the black topping began to break and peel away. As such, he appealed to the State Government to take up prompt measures in this regard.
Pidibou, village secretary, Kangjang village also told media persons that villagers had noticed some inconsistencies when the road construction was ongoing.
However, upon complaining to the contractor responsible, they were informed that the inconsistencies visible in construction were because the black topping had been newly laid.
On the other hand, he added that the Government had provided 20 solar lamps under MANIREDA which led to successful electrification of the  two villages. Unfortunately, all solar lamps have stopped functioning and complaints directed at the relevant authority have not borne any positive results, he rued.
Further, the villages also lack adequate water storage tanks and water supply pipes which has caused a lot of inconveniences to the locals, the village secretary added.
Currently, the villagers obtain water through a solitary water pipe laid down by the collective effort of the locals. The residents collect water from this spot in the village by bringing their personal water containers.
K Poulin, chairman, Kangjang village said that in terms of educational infrastructure, the two villages have a single Government primary school. Two educated locals of the area teach the kids in this school as the teachers posted here have stopped coming. He claimed that the two locals acting as substitute teachers have also not been paid in many months.
The doctors and nurses posted at the local Primary Health Centre work diligently with a spirit of sacrifice. However, the PHC lacks many facilities that are necessary for its smooth functioning, he maintained.
The children of Kangjang and Chakha villages are sent to Senapati and Imphal to receive their education due to the lack of educational facilities in the two villages.
Most of the villagers are reportedly involved in farming and weaving as a means of livelihood. Less than 10 people of the villages have secured Government jobs. In this context it is worth noting that Kangjang and Chakha village have a population of around 280 and 570 people respectively.
Recently, torrential rains caused multiple landslides in various areas of the villages and blocked the roads, thereby cutting off the villagers.