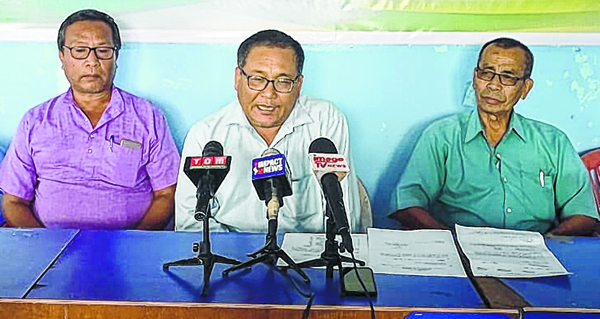 By Our Staff Reporter
IMPHAL, Jun 20 : The Manipur Chess Association has came out strongly against the detection of a registered "parallel Chess Association" and drew the attention of State Government to give befitting punishment to those involved in registering the body.
A press meet was convened today here at Manipur Press Club regarding the issue in the presence of key members of Manipur Chess Association.
Speaking at the occasion, S Muhindro Sharma who is a member of Manipur Chess Association said even as the movement of chess in the State can be traced decades back, the Manipur Chess Association came into existence in 1997 with its formal registration with the Registrar of Societies.
Since its establishment, the association has organised many State level and National level tournaments and produced numerous eminent chess players in the State.
But surprisingly, defying the rule of one apex governing body for one sports discipline, a new association by the name " Manipur Chess Development Association" has been detected, he said.
On further analysing and approaching the office of Registrar of Societies, Lamphelpat, the latter office denied the existence of any State level organisation called "Manipur Chess Development Association", he said.
To everyone's surprise, the association turned out to be a body registered with Imphal East Sub-Registrar office in 2007 with registration number 150 and it was based at Uripok Khoisnam Leikai, Imphal West, he said.
Questioning as to how a registrar body which deals with "Court Marriage, transactions of property etc" managed to register a sports body with it and issued a registration number, he said that it was very unbecoming of the officials concerned.
Issuance of registration number to such an organisation by disregarding the existing body can be considered as a move to malign the chess movement in the State, he added and urged the Chief Minister and Sports Minister to look into the matter and award befitting punishment to the wrong doers.
Many more parallel governing bodies will emerge and will act as a stumbling block to the development of Games and Sports if such wrongdoings are not checked, he said.