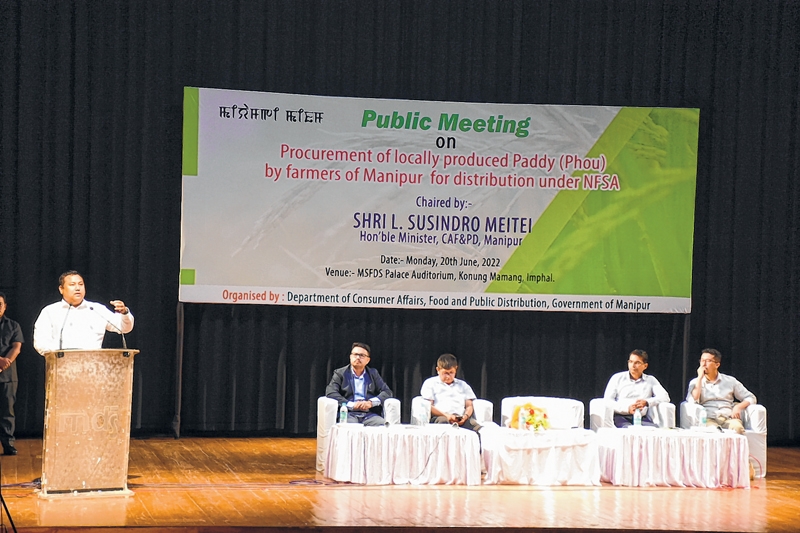 IMPHAL, Jun 20 (DIPR)
Consumer Affairs, Food and Public Distribution Minister Leishangthem Susindro Meitei chaired a public meeting on procurement of locally produced Paddy (Phou) by farmers of Manipur for distribution under National Food Security Act (NFSA).
The meeting was held today at Manipur State Film Development Society Auditorium (MSFDS) Konung Mamang  organized by Consumer Affairs, Food & Public Distribution (CAF&PD), Government of Manipur
Addressing the gathering, Leishangthem Susindro Meitei said that the procurement of the locally produced paddy is a step taken up by Chief Minister N Biren Singh led Government for the welfare of the farmers.
He went on to state that the Food Corporation of India officials have come for a survey for the procurement process as per the norms of FCI.
The initiative has been taken up to create a healthy relation between the Government and the farmers of the State, he added.
Throwing light on the procurement process, the Minister informed that the State Government will procure the paddy through the district officers and the women traders who are in this business from time immemorial for their livelihood after forming syndicates in their respective localities according to the rate fixed by the Government.
He continued that the Government has to fix a rate at this juncture and it is necessary to make the traders aware of the criteria needed for procurement.
The Minister also appealed to the farmers to have faith in the steps taken up by the Government and maintained that the State Government will make necessary arrangements to address the problems of the farmers.
The Minister also sought co-operation of other departments and farmers for the successful achievement of the project.
Speaking at the occasion, Y Robindro Singh, Manager (Movement), FCI, Govt of India gave a detailed account on the feasibility of the procurement process of the FCI.
He said that the Central Government extends price support to wheat and paddy through FCI and State Agencies.
The crops identified by the government are procured at Minimum Support Price (MSP) under the Indian Government policy. The process considers the cost of production, demand and supply, international rate and the living standard of the farmers, he added.
He further stated that the procurement system is divided into Centralized and Decentralized.
Representatives of the farmer organizations deliberated on the feasibility of the procurement of the paddy under the NFSA considering the problems faced by the farmers at present for sufficient supply of paddy in the state.