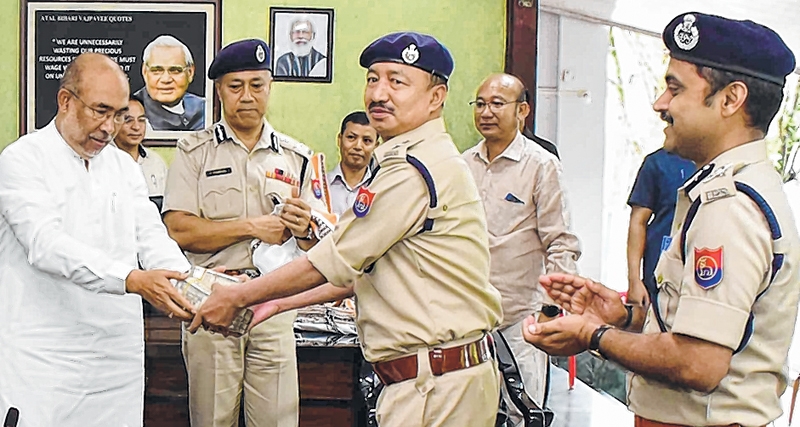 Imphal,  Jun 20 (DIPR)
Chief Minister N Biren Singh today handed over a cash reward of Rs 8 lakh to Thoubal district police as recognition for busting a heroin and brown sugar manufacturing factory at Moijing Mina Bazar, Thoubal district on June 14. Superintendent of Police, Thoubal Jogeshchandra Haobijam received the cash reward on behalf of the district police.
The Chief Minister also handed over a cash reward of Rs 7 lakh to Tengnoupal district police for seizure of drugs including WY tablets, brown sugar and crystal meth amounting to around Rs 127 crore. Superintendent of Police, Tengnoupal B Go Lian Mang received the reward on behalf of the district police.
Speaking at the occasion, N Biren stated that the cash rewards had been given to the police teams in recognition of the achievement and dedicated performance of duty under the war on drugs campaign.
He continued that the State has been facing a drug menace for the last 10 years.  Not only trafficking of drugs from outside the State but also setting up and operating drugs manufacturing factories could be seen nowadays, he said adding that the drug menace has reached an alarming stage in the State.
He mentioned that with the support of public and hard work of the Police Department, the Government’s fight against illegal drugs trafficking and its consumption has scored many achievements.
The Chief Minister continued the Government is still committed to its stand of not compromising on any issue related to drugs as the war against drugs is a continuing campaign. Though the Government is not able to reward every achievement of all police teams at the moment, N Biren maintained that the Government recognises the dedicated service of every police personnel.
Expressing dissatisfaction on the involvement of some police personnel in illegal drug related activities which gives a very bad image to the hard work of the whole Police Department, the Chief Minister stressed on the need for screening of personnel who consume drugs or are connected with such activities to put them in rehabilitation centres or keep them away from war on drugs activities of the Police Department. Director General of Police P Doungel and other senior police officials were also present during the programme.