"Manipur is setting benchmark for a peaceful, progressive & prosperous State" 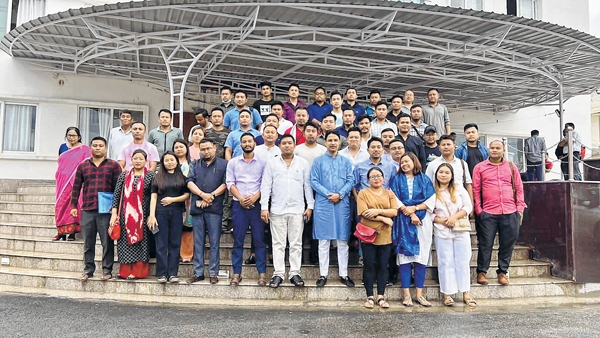 Our Correspondent
THOUBAL, Jun 20 : A meeting was conducted today to discuss the ongoing BJYM activities celebrating the 8 years of 'Seva, Sushasan and Garib Kalyan' under the leadership of Prime Minister Narendra Modi.
The meeting was attended by Raju Bista, Member of Parliament, Darjeeling & National spokesperson, BJP; BJYM Manipur president, M Barish Sharma; leaders of BJYM Manipur State and District presidents, said a release issued by Raju Bista.
Speaking on the occasion, Raju Bista stated that under the guidance of PM and leadership of Chief Minister N Biren Singh, Manipur has made tremendous progress towards achieving "Sabka Saath, Sabka Vikash".
"Today, Manipur is setting the benchmark for a peaceful, progressive and prosperous state in the entire North East region", said the MP while adding that around 30 youth delegates from across India will be visiting Manipur under the BJYM 'Sushasan/Good Governance Yatra' from June 22-25.
"These delegates will learn about our region, people and the various developmental initiatives undertaken by the Manipur Government under the guidance of Narendra Modi and leadership of N Biren Singh", he asserted.
He also mentioned that the delegates would also get to learn about the linguistic, ethnic and cultural diversity of the great state.
Raju Bista further encouraged youths from the region to join the initiative and become a part of BJYM's national integration programme.