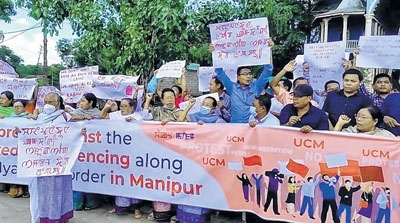 By Our Staff Reporter
IMPHAL, Jun 21 : A scuffle broke out between volunteers of United Committee Manipur (UCM) and police personnel in front of Kangla western gate today as the former protested the continuation of the fencing works along the Indo-Myanmar border.
Reportedly, the UCM staged a protest demonstration as the State Government didn't give any response to its demand to conduct a proper demarcation exercise for Border  Pillars 80 and 81 based on the terms of the 1967 Rangoon Agreement.
A large number of people assembled near the western gate of Kangla at around 1 pm and started protesting there. Shortly later, a team of police led by Imphal West Additional SP arrived at the scene  and attempted to disperse the protesters.
Despite the intervention of the police, the protesters continued the protest and raised slogans urging Chief N Biren Singh and Union Minister of State for External Affairs Dr RK Ranjan Singh to deliver the assurances they have given on protecting the integrity of the land.
As the protesters attempted to march toward the Chief Minister Bungalow, a scuffle broke between the two sides (police and protesters). The police, nonetheless, controlled the agitators and pushed them back toward the western gate of Kangla after a brief stand-off.
Many student leaders and womenfolk also took part in the protest demonstration which was spearheaded by UCM.
Speaking to the media, UCM president Joychandra Konthoujam  urged the State Government to make its stand clear over the boundary issue of Manipur.
Saying that India is putting the land of Manipur at stake on numerous occasions for their benefit, the UCM president stated that one fine example of India not taking the State seriously is giving away Kabow Valley to Myanmar.
Further stating that the State will lose a considerable amount of land once the fencing work carried out by BRTF along the Indo-Myanmar border is com- pleted, Joychandra urged the State Government to stop the fencing works and save the State's land.
The UCM will intensify its agitation if the State Government fails to give a positive response at the earliest.
The UCM had inspected the contentious Border Pillar 91  in August 2021 and asked the project implementing agency to stop the fencing construction work between Border Pillars 80 and 81, he said and added that the continuation of the fencing work is an insult to the people of Manipur.
“No tangible actions have been initiated so far to solve the issue though the Chief Minister and Union MoS have assured to look into the matter,” Joychandra maintained and said that the leaders of the State not delivering their assurances is unfortunate.
"Instead of indulging in dilly-dallying, make your stand clear over the boundary issue," the UCM said, targeting the State Govt.