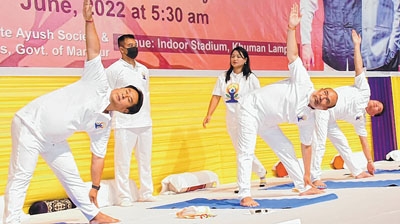 By Our Staff Reporter
IMPHAL, Jun 21 : As in other parts of the country, the State observed the 8th International Day of Yoga in the presence of Chief Minister N Biren Singh and other Cabinet Ministers  at the Indoor Stadium of Khuman Lampak today.
The observance was jointly organised by Directorate of AYUSH, Manipur; State AYUSH Society, Manipur and  Directorate of Youth Affairs & Sports (YAS) under the theme “Yoga for Humanity.”
Speaking as the chief guest, N Biren said that it was Prime Minister Narendra Modi who proposed the idea to hold International Day of Yoga every year during a United Nations General Assembly held on September 27, 2014.
Continuing that this year theme for the day is “Yoga for Humanity” and it implies that yoga helps in building good relations among the people, the Chief Minister urged everyone to practise yoga daily to improve immune system and boost self confidence.
Saying that a healthy person imbibes positive thoughts consistently, N Biren stated that altogether 175 Nations including China and USA supported the resolution taken by India on International Day of Yoga at the United Nation General Assembly as it was brought up in the larger interest of fellow human beings.
N Biren further stated that a person must treat every human equally irrespective of their background and social positions.
"Respecting the elders is ingrained  in our culture," the Chief Minister maintained and added that a human must never  act superior to another or display overbearing behaviour such as superiority complex.
"It would be little easier building an egalitarian society if there is mutual respect among the people," he added.
Saying that the State was able to overcome Covid pandemic due to the concerted effort of all, N Biren thanked the people of Manipur for adhering to Covid appropriate behaviour and prevent coronavirus from causing extensive damage.
He further stated that the measures being taken up by Prime Minister Narendra Modi to address the woes of the people during the peak of the pandemic was remarkable.
Cabinet Ministers namely Th Biswajit, Yumnam Khemchand, Govindas Konthoujam, Nemcha Kipgen, Awangbow Newmai, Letpao Haokip, L Susindro Meitei, Heikham Dingo Singh, Thounaojam Basanta Singh, Kashim Vashum and Dr S Ranjan Singh also attended the programme.
The day was also observed at different parts of the State.