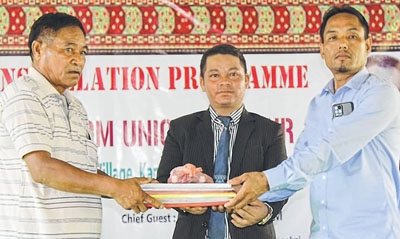 By Our Staff Reporter
IMPHAL, Jun 21: The Coordination Committee on Manipur Integrity (COCOMI) has placed a proposal before all the indigenous communities of the State for introduction of a bicameral system of legislature in Manipur too as done in some other States of India.
A felicitation cum installation programme of the newly elected president and other office bearers of the Kom Union Manipur (KUM) was held today at Maibung Kom Village, Kangpokpi district.
Addressing the programme as a guest of honour, COCOMI Coordinator Longjam Ratan said that introduction of bicameral system would go a long  way in ensuring the political rights of small communities like Kom, Tarao etc who cannot elect MLAs of their own to the Manipur Legislative Assembly.
If there is a two-House system, representatives of even the smallest communities will find their place in the State Assembly, he said.
A bicameral system would also be quite effective in checking undue influence upon small communities by immigrants in the name of demanding political rights and in stopping polarisation of communities on ethnic line, the COCOMI Coordinator said.
Pointing out that Manipur is the common home of many indigenous communities since time immemorial, he decried that a few groups of people who have been working at the behest of external forces including immigrants have been creating all sorts of disturbances since some years back in the name of demanding political rights.
The situation is critical, he remarked.
Even though ILPS has been enforced in the State, there is no let up to influx of non-local people as the system has many loopholes, Ratan said.
Influx from mainland India, illegal immigration from Bangladesh and Myanmar has severely distorted the demographic profile of Manipur, he added.
All the indigenous communities of Manipur need to understand the common threat and fight the external forces collectively, instead of harbouring ill-will and hatred against each other, Ratan said.
He warned that all the indigenous communities would be rendered totally helpless if the population of immigrants outnumbers that of the indigenous population as those who secure maximum votes are elected to power in democracy.
If indigenous communities like the Koms who have been taking active roles in safeguarding the integrity of Manipur fall into the trap and propaganda of immigrants, they will lose all their cultures and identity too.
Ultimately, Manipur will fall at the hands of immigrants and non-indigenous people, he warned.
Saying that it would be difficult for any community to protect and promote their identity, culture, tradition etc if their economic situation is not sound enough, the COCOMI urged Kom people to exploit whatever resources are available in their areas for economic upliftment.
He also urged the Kom community to focus on education and teach the younger generations the true history of the land.
Newly elected KUM president S Chungjahao Kom said that Kom is an indigenous community of Manipur and they always occupy an  important place in the history of Manipur starting from the period of Moirang Kangleirol. Noting that different factors have been diluting and distorting the identity, culture and traditions of Kom community, Chungjahao Kom said that KUM would do everything to protect the identity and culture of Kom community.
He said that KUM would pay special attention to education and economic development in addition to investing extra efforts in the field of games and sports.