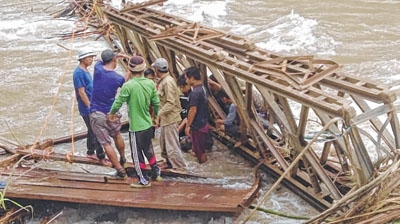 Our Correspondent
CCpur, Jun 21 : A road construction worker headed for home drowned at Tuivai River near Khuanggin village today as a makeshift bamboo float he rowed along with two others capsized while trying to cross the river.
Brojen Luwangsangbam and two of his friends, sources said, took the bamboo float which travellers take to cross the Tuivai River today at about 7.30 am.
About midway in the river while crossing from Sinzawl side of the river bank towards Khuanggin, their bamboo float overturned. Two of the people on board could be rescued but Brojen went missing beneath the heavy current.
Villagers from the nearby areas immediately mounted a search and his body was eventually fished out in the evening.
The Khuanggin bridge that connects Khuanggin and Sinzawl collapsed sometime in the first week of May under the weight of heavy trucks.
Ever since, makeshift bamboo floats were used for crossing the river irrespective of the danger involved.