State Cabinet adopts 1961 as base year for ILP 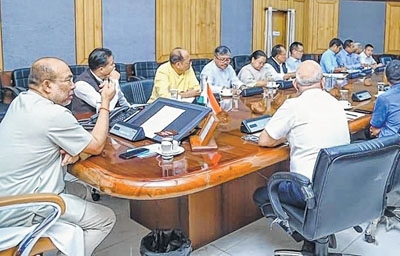 IMPHAL, Jun 22 (DIPR)
The State Cabinet has resolved to adopt 1961 as the base year for determining “native” status in the implementation of Inner Line Permit System in the State.
The resolution was made during a State Cabinet meeting held today at the Cabinet Hall of the Chief Minister’s Secretariat chaired by Chief Minister N Biren Singh.
Our Staff Reporter adds : Significantly, the Joint Committee on Inner Line Permit System (JCILPS), which spearheaded the demand for implementation of the ILPS in Manipur had last year demanded putting the base year at 1951 to define the indigenous people of the land.
During the meeting, Manipur State Vision Document 2047 was also presented.
It may be noted that the Vision Document aims to make the State a vibrant, carbon-neutral and economically, socially and ecologically sustainable State in the next 25 years. It also includes touching and ameliorating lives of people within and beyond its borders, leveraging on its unique legacy to emerge as a sparkling jewel of India.
The Cabinet further approved the publication of Draft GIS Based Master Plan for Greater Imphal for the horizon year 2041.
The Greater Imphal Plan aims to make Imphal a sustainable regional growth centre and gateway to Asia through appropriate land use and environment management. Further, the Cabinet decided to regulate usage of land in the six valley districts of Manipur under MTCP Act and other relevant Acts. Concurrence of State Planning Authority will be mandatory for land use.
The Cabinet also resolved to extend the applicability of existing guidelines for the Idea Category of the Manipur Startup Scheme for Special Covid Pandemic Economic Support.
Following this, it approved the inclusion of 10 villages, including Phougakchao (Ikhai), Saiton, Salankonjin, Watha Lambi, Nganukon, Leitanpokpi, Heiyaikon, Saiton Awang Ngairong and Torbung (Gram Panchayat area under Kumbi Assembly Constituency) under the jurisdiction of Phougakchao (Ikhai) police station, Bishnupur district.
Notably, during the Cabinet meeting, resolution to schedule the election to 27 Urban Local Bodies including Imphal Municipal Corporation around the last week of September this year was also approved.
The Cabinet then approved the extension of the municipal boundary of Wangjing Lamding Municipal Council by including 17 Wards falling under 3 Gram Panchayats, subject to concurrence of Rural Development & Panchayati Raj Department and Delimitation under relevant Act and Rules.
The State Cabinet reaffirmed its earlier decision to include Lilong Haoreibi Muslim-Haoreibi Makha Leikai D (of erstwhile Part 1/12 and Part 11/12 of Samurou Municipal Council) in Turel Ahanbi Atoukhong Gram Panchayat, Thoubal district.
The meeting also resolved to create 2 posts of Assistant Professor in the Department of ENT, Jawaharlal Nehru Institute of Medical Sciences to enhance the functioning of the department.
The Cabinet further approved the creation of various non-teaching posts and to fill up the same in order to expedite the operationalization of Churachandpur Medical College. It  also decided to fill up various vacant posts in different categories available at District Hospital, Churachandpur. Further, the Cabinet approved the transfer of land measuring an area of 17.954 acres at Revenue Village No 19 – Koirengei, at Thengu Chingjin to the Planning Department, Government of Manipur for construction of Integrated Conference Complex.