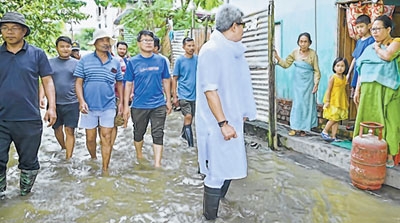 By Our Staff Reporter
Imphal, Jun 23 : Keishamthong AC MLA Nishikant Singh Sapam has asked the people to take equal responsibility in keeping drains free from clogging to prevent inundation especially during the rainy season.
The MLA who is also the owner of The Sangai Express made the statement while inspecting the flood situation at Kwakeithel Khwairakpam Leikai and sections of Nepra Menjor Leikai and Sagolband Meino Leirak which fall under the jurisdiction of Keishamthong Constituency, today.
Notably, many people in other areas of Imphal such as  Babupara, Singjamei and Kakwa also woke up to knee-deep water due to the torrential rain that lashed the State from yesterday evening till this morning.
At the inspection visit, Nishikant continued that instances of  artificial flooding in Imphal whenever there is heavy rain cannot be solved without the support of the people as the main factor for the inundation is clogged drains.
Urging the clubs and people in urban areas to stop dumping empty water bottles or any other solid substances to the drains which can block the free flow of water, Nishikant stated that solving this chronic issue would be difficult if the public don't take the matter seriously and continue dumping garbage without a thought for the future or others.
Saying that he, nonetheless, will give his maximum effort to solve the issue, the MLA continued that he also has been cleaning the drains in the Constituency in advance so as to minimise the instances of artificial flooding during the monsoon.
Nishikant further stated that he will intensify his work once the Local Area Development Fund and other development funds are released.
Lastly, the MLA urged the people of Keishamthong AC to understand the gravity of the situation and dispose their garbage properly.
Nishikant also interacted with the representatives of different local clubs to address the woes of the people.