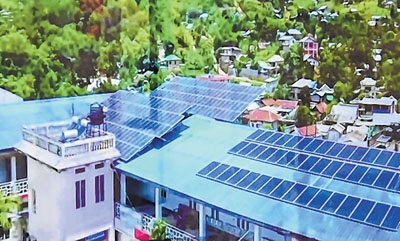 Imphal, Jun 23 (DIPR)
Chief Minister N Biren Singh virtually inaugurated solar power systems of Government health facilities for the three districts of Chandel, Churachandpur and Tamenglong at the Chief Minister’s Secretariat today.
SELCO Foundation in collaboration with the Directorate of Health Services has installed solar power systems at 68 health centres across the three districts and provided them with energy efficient equipment, including Radiant Warmer, Suction Apparatus, Spot Light, Solar Direct Drive Vaccine Refrigerator and Luminaries.
The project is one of the 100 Action Points for 100 days of the State Government.
Interacting with officials concerned of the three districts and representatives of SELCO Foundation, N Biren appreciated the SELCO Foundation and Government officials for successfully implementing the project. He added that with the implementation of the solar power system, 68 health centres across the three districts would be having 24/7 power supply.
The Chief Minister mentioned that remote areas of the State had been facing irregularities in power supply due to the long rainy season and its consequences like landslides and floods.
He continued that the Government understands the problem faced by health centres in remote areas which often interrupt their services. As such, the Government supported the proposal of SELCO Foundation to provide uninterrupted power supply through solar power systems, he added.
He stressed the importance of proper maintenance of the solar power projects. He suggested that a person each should be assigned in all the 68 health centres to look after the solar panel and other components. Training should be provided to the person in consultation with SELCO Foundation if required, he added.
N Biren also proposed CEO, SELCO Foundation Harish Hande who attended the programme virtually to cover all the remote areas of the State under their project and assured all possible support from the Government side.
Chief Medical Officers of the three districts expressed their gratitude to the Chief Minister for coming up with the initiative to provide uninterrupted power supply to health centres and added the health centres are now able to provide better health care services to the public. Health and Family Welfare Minister Dr Sapam Ranjan, Chief Secretary Dr Rajesh Kumar, Additional Chief Secretary V Vumlunmang, Director, Health Services Dr K Rajo and representatives of SELCO Foundation attended the programme, among others.