Meghachandra Kongbam dedicates to the brave warriors of Manipuri Cinema 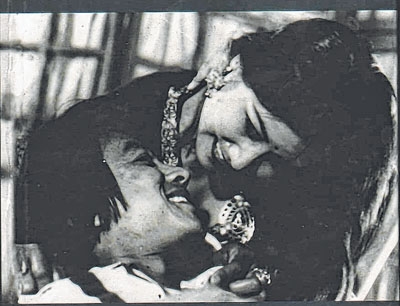 It is said that there are art lovers born here in Manipur whose will power and interest never remain in vain. It is well said that ‘Mamitta Thibong Panba’ meaning that the Manipuris have everything in their hands and eyes and thus without formal training and technology, they can  come up in any field upto the mark. They never lag behind in any field even though there is no adequate infrastructure and technology.
The pioneers in any stream were always warriors. Keeping in mind such difficult times of the beginning of Manipur Cinema, Meghachandra Kongbam dedicates his book entitled Manipuri Cinema to the warriors in the field. The giant social worker and humanist Baba Amte used to quote a line inscribed on the memorial plate of an unknown soldier in British war Cemetery, Imphal which runs as ‘I have sacrificed my precious today for your golorious tomorrow.’ If we go deep into the undercurrent of the line, here lies everything in between the past and present today. The forefathers toiled hard in the past and we enjoy the taste today.
Manipur Cinema of Meghachandra Kongbam recently launched is a chronicle of this art form in the region. His attempt to bring out such a masterpiece on the journey of films in this land is worthy to be appreciated. His effort revolves around paying befitting tributes to those producers, directors, script writers, lyricists, actors so on and so forth. The book not only deals with the pioneers, but also covers different stages in this industry.
Man cannot live without entertainment and as such life will be very dull and dry. Amidst the heavy task of making a film, the pioneers endeavored in the short cycle of Manipuri Cinema ranging from the smallest thing to the biggest one to have its aesthetics and peak for the purpose. Not merely entertainment, the films also render inputs to the spectators the lessons of heroic deeds, villainous acts coupled with the hilarious part. What is just and what is wrong can be derived from films and it impacts the cine goers.
One can imagine the nasty ideas of those pioneer warriors who without much facilities and logistic support had tried to find out and capture the maximum elements required for making a film by stepping into the wide scope of the industry. Ethereal body of those pioneers involved in the journey of Manipuri Cinema have already passed away but they will remain immortal by dint of their ideas, thought, craftsmanship, accepting roles in odd situation standing firm against negative comments and views etc etc. Now we enjoy them all and to this Meghachandra Kongbam reminds the mass of this reality through his book. There occurs the grading of quality of an art work within a fraction of second while making it means consuming time, energy and money. As all the efforts co-relate with the final outcome, the doers must not be the shakers. However, continuous attempts have been there despite limited market of audience either dreaming for box office or art for art’s sake.
Everyone has divinity in himself but it is not always shown. Likewise everyone has talents of his or her own but all have not the opportunity to show it to the world. However, the film makers have shown, directors demonstrated, the producers reached out to the public domain, the talents of those varied characters by different artistes in the history of Manipuri Cinema.
Recently I had an opportunity to meet and mingle with Shri Banka Sharma, one of the film makers who had once won over the heart of melody queen Lata Mangeshkar. The purpose for it, we see is how he wanted the noted singer to sing a song in a Manipuri Cinema. Ultimately, it could materialize too. I feel proud of it, at least I could show my respect and regards to him. Like producing many Olympians from the State in comparison with its size & population, sizable volumes of films in a short span of its journey have been produced and as such the recognition and appreciation at the International level too. It may not amount to self praising but tend to encourage & follow the footsteps of pioneers who  explored the great artistic talents, ethos, culture and lifestyle of the region. Some of the films universally appeal. No one can deny it. The maxim old is gold always applies here.
It is worthy to pay humble tributes & regards to those who were involved & left this world and still living. RK Bidur’s role in the field everyone knows and so he is fondly remembered. He was in the clutch of the jaws of death in the second wave. Yambem Tombi Devi also salutes to those who were /are in the field even by authoring her book entitled, Cinema & Cinema more than a decade ago. Bravo to the film industry and other documentary film makers for their continuous, adventurous and extraordinary works.