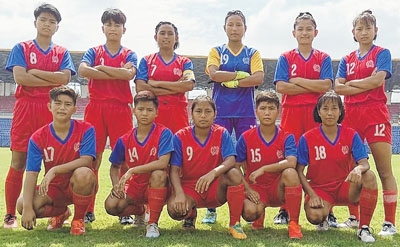 By Our Staff Reporter
IMPHAL, Jun 24 : Having crushed Uttarakhand 14-0 in the Hero Junior Women's National Football Championship Group A opener, Manipur rode on Kimte Langel's four to demolish Andhra Pradesh 17-0 for the second straight win today at Indira Gandhi Athletic Stadium.
Hoineihat and Thingbaijam Sanjita also shone with three goals each in this one sided encounter as Oinam Babita and Toijam Thoibisana added two goals each.
Manipur dominated the game word go and were 10-0 ahead before the half time as Kimte Langel opened the scoring before completing her treble before the break with goals coming up in the 21st and 35th minute.
Kongkham Priyangka made it 2-0 after 6 minutes before Ipham Romina Begum kept the scoreboard ticking with the team's third in the 8th minute.
Oinam Babita then took his time out to hit a brace in the 17th and the 18th minutes to make it 5-0.
Thingbaijam Sanjita also scored two goals both in the 32nd minutes (between Kimte Langel's second and third goal) and before Moibungkhongbam Sanjana scored at the stroke of the first half (45') to make it 10-0.
State girls picked up the game before where they left after the restart and it was Toijam Thoibisana who made it 11-0 in the 47th minute before Kimte Langel completed her scoring two minutes later.
Hoineihat also added another goal in the 56th minute before Toijam Thoibisana completed her double in the 58th minute to make it 14-0. Hoineihat then completed her double in the 71st minute before Thingbaijam Sanjita made it 16-0 in the 87th minute.
Hoineihat then took deep into the stoppage time (90+3') to complete her treble and the 17-0 rout of Andhra Pradesh.
The win fired Manipur on top of Group A table as Jharkhand beat Uttarakhand 1-0 in another Group A encounter of the tourney.
Manipur will play Jharkhand next on June 26 in the clash for Group winners.