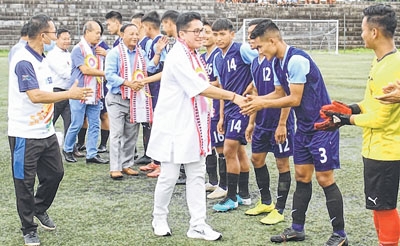 By Our Staff Reporter
IMPHAL, Jun 24 : Heirok Higher Secondary School representing Thoubal crushed Aimol Khullen Jr High School representing Tengnoupal 6-1 as the State Level Subroto Mukerjee Football Tournament (Inter School) for U-17 boys kicked off at Langjing Turf ground today.
Manglenthang starred with a treble as the Heirok team took a comprehensive 5-1 lead before the break before sealing the game 6-1 in the Group A opener.
Aimol Khullen side managed to hold off the Heirok side offensive for long until Manglenthang opened the floodgate in the 18th minute.
L Rajboy and S Obedhia scored a goal each back to back in the 21st and 23rd minute to take the tally to 3-0 before Manglengthang added his second in the 27th minute. S Obedhia struck again in the 30th minute to make it 5-0 as the Tengnoupal team remained struggling for their opening goal, which they eventually got two minutes into the added time of the opening half (30+2') via Mangte Herochung.
The Thoubal team rested back for a major portion of the second half before Manglenthang completed his treble three minutes away from time (57') to make the final scoreline read 6-1.
Elsewhere at Artificial turf ground (Group B), Lamlong Thongkhong, Seikhor Govt HS representing Ukhrul thumped Kamjong Hr Sec School 3-0 courtesy goals from Honychui Horam (5'), Mathanmi Ningsen (20') and Vs Thotkadhar (24').
Meanwhile in the U-14 boys opening match (Group A), Imphal East represented by Diana English School blanked Sanatombi High School of Kakching as S Lamnganba hit a brace.
The two sides were evenly poised and entered into the break goalless but S Lamnganba netted twice, back to back in the 28th and 34th minute to hand the Imphal East side a 2-0 lead.
The scoring spree continued with Ch Jangminthang adding the team's third in the 43rd minute before K Alvis converted another chance two minutes later to further extend the lead to 4-0. Md Muhadish then hit the decisive goal in the 48th minute.
16 teams are competing in both the U-14 and U-17 boys tournament being organised by the Department of Youth Affairs and Sports.