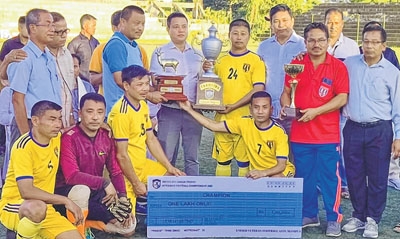 By Our Staff Reporter
IMPHAL, Jun 26 : FC Imphal, Mayaikoibi beat UVSA, Lilong Chajing 4-2 on penalties after 1-1 regulation time draw at Artificial Turf Ground today to clinch the title of the 4th edition of RKFD's Sangai Trophy Veteran Football Championship organised by United Veteran Football Association.
It was a neck and neck competition with both teams toiling hard to go up and it was Lamkholen who put FC Imphal in the front foot with a fine shot in the 26th minute. The lead was however cancelled out after 30 minutes as N Itocha of the Lilong Chajing side converted a penalty which was awarded following FC Imphal defender Meino's foul inside the area.
The later part of the game was an end to end affair with both the sides searching for the winner but without much result. Eventually the game was decided by penalty shoot-out wherein M Meino, M Kiran, S Somananda and Lamkholen found the target for FC Imphal and only K Khelendra and N Itocha scored from the spot for the Lilong team.
The winners walked away with a cash prize of Rs 1,00,000 and a trophy donated by RK Rameshwar Singh, MD of RK Fortune Developers Pvt Ltd in memory of his late father RK Balaram Singh. Meanwhile UVSA were feted with a cash prize of Rs 50,000 along with a trophy donated by RK Rameshwar Singh in honour of legendary footballer of the yesteryear. VSAI, Thangmeiband were on the other hand adjudged fair play team and feted with a cash prize of Rs 10,000.
Eldest player, K Birendra of AMBA; best player above 50 years, K Ibomcha of FC Imphal; best player (between 45 to 50 years), K Kipgen of FC Imphal and best player below 45 years, M Bidyasagar of FC Imphal; top scorer, W Ajit of FC Imphal; best midfielder, Kh Sanatomba of UVSA; best defender, K Premkumar of UVSA and best goalkeeper, RK Chandrajit of FC Imphal were also feted with cash prizes of Rs 5,000 and trophies sponsored by various personalities.