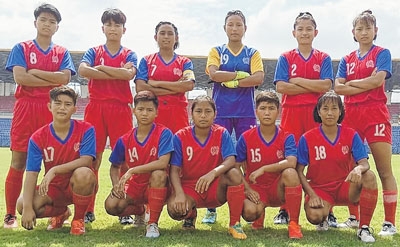 By Our Staff Reporter
IMPHAL, Jun 26 : Kimte Langel and Moibungkhongbam Sanjana Chanu starred yet again as Manipur devastated Jharkhand 11-0 to finish on top of Group A league table in the ongoing Hero Junior (17) Women National Football Championship being hosted by Assam and book a place in the quarter finals.
Having secured emphatic wins against Uttarakhand and Andhra Pradesh in the previous matches, Manipur girls continued their fine run to win the crucial top of the table contest at Indira Gandhi Athletic Stadium, Guwahati.
Kimte Langel (9', 21', 44', 86') proved her scoring prowess yet again as she netted four goals alone today including the opener apart from providing an assist as Sanjana (40', 82', 90+5') hit a treble.
Thingbaijam Sanjita (13'), Oinam Babita (14'), Ipham Romina Begum (49') and Khumukcham Sanamiza Chanu (86') also got their names on the scoresheet in Manipur's comfortable win.
Kimte opened the scoring off a freekick before Sanjita sent home a longball into the net for the second goal in the 13th minute off a beautiful assist from Kimte for the second goal. Babita then stunned the Jharkhand keeper with a looping shot off a Romina assist the next minute to make it 3-0.
Kimte then converted a cutback from Luxmi inside the box to make it 4-0 after 21 minutes before Sanjana opened her scoring by tapping home a fine cross from luxmi after 40 minutes.
Kimte struck her fourth goal by latching onto a through pass from Manao to hand Manipur a 6-0 lead before the break.
Romina then made the most of a one-two to take the tally to 7-0 before Sanjana completed her double with a clinical close range shot as Romina set up a fine pass.
Kimte then fired home her final goal with Sanjana setting up a cutback  in the 85th minute.
Sanamija then slotted home a fine cross by Sanjita from the corner two minutes into the stoppage time before Sanjana dodged past a few defenders to banged in from close range 5 minutes into the stoppage time.
Manipur will play Group C holders Bihar in the quarter final match on June 29 at 9 am.
In a dead rubber Group A league match, Uttarakhand blanked Andhra Pradesh 4-0 to finish third in Group A standings.
Other results
Kerala 8-1 Ladakh; Odisha 0-3 Maharashtra; Tamil Nadu 3-0 Rajasthan; Chandigarh 0-4 Dadra and Nagar Haveli; West Bengal 13-0 Jammu and Kashmir; Bihar 2-0 Madhya Pradesh; Punjab 1-1 Nagaland; Meghalaya 0-7 Delhi.
Quarter final fixture
Manipur vs Bihar
Chhattisgarh vs Arunachal Pradesh
Haryana vs West Bengal
Kerala vs Dadra and Nagar Haveli