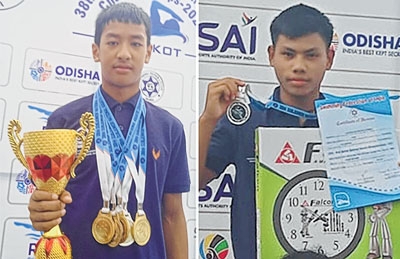 By Our Staff Reporter
IMPHAL, Jun 26 : Young Manipuri swimmer Laitonjam Lanchenba was adjudged "best swimmer" of the 38th Sub-Junior National Aquatic Championships held at Rajkot after his rare 5 medal winning feat.
Lanchenba who won a gold medal in the 100 m breaststroke with a time of 1:21.37 on June 24 and a silver medal in the 200 m medley event yesterday with a time of 2:38.75, went on to bag three more gold medals in the today to take his medal tally to 5.
Lanchenba, who hails from Singjamei Thokchom Leikai, won his second gold medal in the 50 m breaststroke event with the best time of 38.38 seconds.
He clocked 30.71 seconds in the 50 m butterfly event to secure his fourth medal and third gold before taking the 50 m freestyle gold with a timing of 29.38 seconds.
Manipur's L Dickson also scored 300.05 points in the highboard diving for Boys' Group I to secure a silver medal. The State team were led by H Gojen as coach cum manager.
It may be noted that swimming prodigy, Lanchenba is the son of L Kanta Meitei and L ongbi T Sonia Devi and started taking swimming lessons from coaches H Dhamen and M Purnachandra at Wangkhei Ningthem Pukhri Mapal from his early age.
Having trained for about 2 years at Wangkhei Ningthem Pukhri Mapal, he has been undertaking swimming classes at Modern College Swimming Pool since 2021 under T Thouba who is an international swimmer.
Lanchenba had also won a silver and a bronze medal in the previous edition of the championship held in Bangalore.