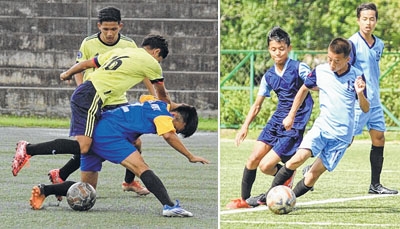 By Our Staff Reporter
IMPHAL, Jun 27 : Seikhor Government High School, Ukhrul blanked Senapati High School 9-0 at Turf Ground, Lamlong Thongkhong to consolidate themselves at the top of Group B in the State Level Subroto Mukerjee Football Tournament for U-17 boys.
Having notched up two big wins against Kamjong and Noney teams, Seikhor Government High School rode on doubles from VS Thotkadhar and N Jarish Singh to carve out the big win today.
Thotkadhar opened the scoring in the 12th minute before Vishal of Senapati High School conceded an own goal in the 15th minute.
Honychui Horam then made it 3-0 after 24 minutes before Thotkadhar completed his double in the 29th minute to give his team a 4-0 first half lead.
The Ukhrul team continued to press hard and kept looking for scoring chances after the break as well and it was Yokshim Awangshi who made it 5-0 after 37 minutes.
Manthanmi Ningsen then added another in the 48th minute to carry forward Ukhrul side's scoring spree before N Jarish banged in twice in the 51st and 57th minute to make it 8-0.
Ikror Horam then fired home the final nail in the coffin in the 59th minute.
Meanwhile, St Peter's Higher Secondary School Chandel,  who lost 0-2 to Kinship HS, Churachandpur in the previous Group C match, kept their semi-finals hope alive by beating RK Sanatombi School, Jiribam 4-1 today.
Chandel put in a dominant performance and were 2-1 ahead before the break before pumping in two more goals in the latter half. Lallawm-kung broke the deadlock in the 14th minute to give RK Sanatombi School, Jiribam the headway but NL Kono scored the equaliser for the Chandel team in the 23rd minute and K Alex overturned the lead two minutes later.
Juda further extended Chandel team's lead after 45th minute before Kendashah fired home the decisive goal in the 47th minute.
Elsewhere in a crucial Group A league match, CT Higher Secondary School, Imphal West and Heirok Hr Secondary School, Thoubal played out a goalless draw.
The result however helped the Imphal West School finish on top of the league table courtesy of a 7-1 win over Aimol Khullen Jr HS, Tengnoupal in the previous match.
Meanwhile, TG Eng School, Bishnupur beat Bukpi Govt HS, Pherzawl 4-1 to spice up the semi-final race in the Group D competition.
Suraj Wangkhem did the star turn as he banged in three goals alone (29', 35', 39') in this one sided encounter while Th Sanathoi managed a goal in the 33rd minute. The Bishnupur team could have got a clean sheet but A Tom Joseph conceded an own goal in the 37th minute to make it 4-1 at the end.
They will take on the Education Training Centre, Kangpokpi tomorrow in a match which will decide Group D winners.
U-14 Boys Tournament
In the U-14 boys matches staged today, Kinship HS-CCPur; Bukpi Govt HS-Pherzawl and Mt Zion Sr Secondary School registered wins as Diana English School, IE played out a goalless draw with Siroi Govt HS, Ukhrul.
In a Group C match staged at Langjing Turf ground, Kinship HS opened their winning account beating RK Sanatombi Vidyalaya, Jiribam 3-0 courtesy goals from Lalkauplien (22'), Satmilun (25') and Tilgunmang (42').
In a Group D league match, Bukpi Govt HS rode on Jangginlen goal in the 37th minute to seal a 1-0 win over Kamjong High School, Kamjong.
Meanwhile in a similar encounter, Mt Zion Sr Secondary School posted a 1-0 win over Little Master Eng Hr Secondary School thanks to Veithraio's goal in the 49th minute.