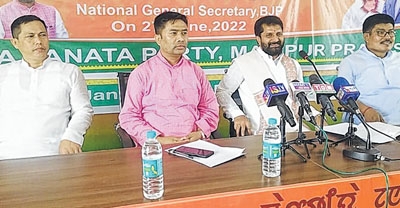 By Our Staff Reporter
IMPHAL, Jun 28: BJP National general secretary CT Ravi has categorically stated that Opposition Congress party should not stir public disorder or create an issue out of Agnipath scheme.
CT Ravi who came to the State on a three-day tour left Imphal today.
Speaking to media persons at the Nityaipat Chuthek office of BJP Manipur Pradesh before leaving Imphal, CT Ravi accused Congress party of creating issues out of non-issues only to stir public disorder and instability in the country.
Congress party has been suffering from a mental disposition to oppose and disrupt every welfare scheme and development project taken up by the Government, he said.
Congress party should stop floating false propaganda and put an end to its misinformation campaign against Agnipath scheme, asserted the BJP National general secretary.
He said that the Agnipath scheme launched recently would not only strengthen the country but also bring benefits to different sectors.
People are aware of the many changes and developments brought about by the BJP’s double-engine Governments in the State and the Centre, CT Ravi said.
He then conveyed gratitude to the people of Manipur for re-electing BJP to power.
The country has been marching ahead in different sectors under the leadership of Prime Minister Narendra Modi. Following the introduction of Direct Benefit Transfer (DBT), benefits of several schemes are bring delivered to beneficiaries directly, he said.
The BJP-led NDA Government has successfully brought about significant economic growth in the country as indicated by the GDP growth rate of 8.7 per cent, CT Ravi claimed.
The NDA Government led by BJP has already achieved the milestone of successfully providing tap water to over six crore households.
Apart from raising the number of IIITs, more than one lakh Kms of National Highways have been constructed and LPG connections have been given to over nine crore women, CT Ravi added.