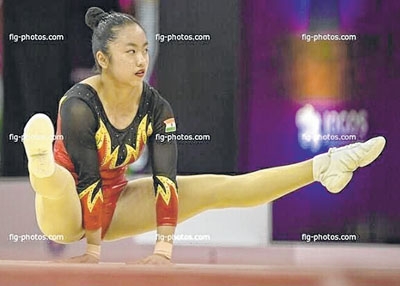 By Our Staff Reporter
IMPHAL, Jun 28 : Promising State Gymnast, Ariha Pangambam has committed to perform better in the upcoming championship after 17th FIG Aerobic Gymnastics World Championships debacle.
Speaking exclusively to The Sangai Express, Ariha who represented India at the FIG Aerobic Gymnastics World Championships held from June 16 to 18  in Guimaraes, Portugal expressed that her performance was greatly affected by delay in Visa procedure which forced her to reach the venue late.
She said she had applied for VISA advance in April but inordinate delay in its procedure made her cancel her previously booked ticket and booked a new one and left India by June 14, which was the last day for arrival as stipulated by the organising committee.
Subsequently she reached the venue a day later and as expected her entry was rejected at first. But luckily got the chance to compete after her coach, Yumnam Ranjan made an earnest appeal to the FIG, she said.
Despite reaching late and being bereft of plenty of practice at the venue, she managed to score the highest points among the 16 Indian gymnasts competing in the world championship, she said.
However, she failed to make it to the list of best 15 athletes at the championship, said Ariha Pangambam, a gold medallist in the National Aerobic Gymnastics Championships 2022 held in March at Bengaluru.
It was indeed a tough and forgetful experience to have competed in an international event without the support of anyone, the 18 year old gymnast said.
Expressing regret over the lack of sponsorship and the encouragement she needed as athletes in other States get, sad Ariha also maintained that she is yet to receive any word of appreciation or encouragement from anyone till date.
Ariha, daughter of Pangambam Akhelo and Pangambam Chaoba of Kongba Uchekon, however said that she had to be content with the fact that she participated in the world championship despite the delay and unwarranted pressure she had to bear.
She also pledged to work harder to improve her performance at the Asian Championship slated to commence from September 3.
It is learnt that the trial selection for the Asian event is scheduled to be held from July 20 in Jammu, Ariha who is a student of Kendriya Vidyalaya, Lamphel said while  exuding confidence that she will impress all with her performance and secure a place in the Indian team.