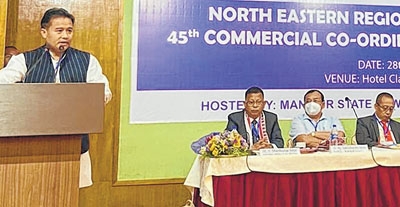 By Our Staff Reporter
Imphal, Jun 28 : Power Minister Thongam Biswajit has called for a revamp of the power sector in the entire North East region to generate more income from the sector.
He made the statement at the opening ceremony of 45th Commercial Co-ordination Sub-Committee Meeting (CCM) of North Eastern Regional Power Committee (NERPC) held today at the Imperial Hall of Hotel Classic Grande at Chingmeirong.
The programme was organised by Manipur State Power Distribution Company Limited (MSPDCL).
Speaking as the chief guest of the function, Th Biswajit said that there are certain challenges in implementing developmental projects in North East India due to geographical locations but the region has all the potential to prosper.
Saying that he was disheartened to notice that Manipur still purchases power from other States, the Minister continued that levying low tariff on electricity from the consumer is a major challenge besieging the power sector of the State.
Other States charge Rs 7 for every unit of power from the consumer but the same is only Rs 5 in Manipur, he added.
The Minister also spoke about the various power related projects which the State Government is considering to implement.
As per Biswajit, 66 MW Loktak Downstream Hydroelectric Project, 1500 MW Tipaimukh Hydroelectric Project, 190 MW Pabram Hydroelectric Project, 60 MW Irang Hydroelectric Project, 51 MW Tuivai Hydroelectric Project, 70 MW Nungleiband Hydroelectric Project and 67 MW Khongnem Chakha Hydroelectric Project are in the pipeline while 29 locations have been identified  to implement certain mini hydroelectric projects.
He said that implementation of 66 MW Loktak Downstream Hydroelectric Project is being delayed as the Ministry concerned didn't approve it at first due to cost factor consideration. "Now the consultancy process for the project is completed and it is in the stage of DPR preparation," he added.
The Minister further stated that the State will be able to collect substantial income from the power sector once all these projects become operational.
There was even an instance where the Centre even agreed to bear 90 per cent of the cost in developing a hydroelectric project (upto 5 MW) in the State, Biswajit stated.
Saying that the State has installed prepaid electricity meters at about 80,000 households, Biswajit continued that the process of installation and activation of  prepaid meters would be completed by the end of 2022.
The Central Government is targeting to reduce AT & C losses (energy) to pan India level of 12 to 15 per cent by 2025 but the State could achieve this ahead of 2025, he added.