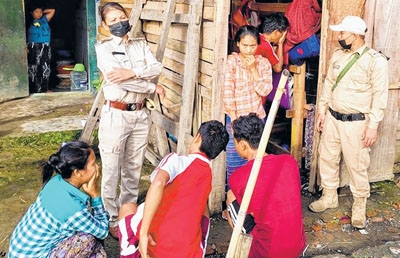 Our Correspondent
CCpur, Jun 28 : The Churachandpur police have detained about 80 Myanmar Nationals from various localities in Churachandpur district following a massive morning raid on their shelters.
Multiple sources said the police raid started at about 5 am and lasted about 3 hours. Several rented houses at various localities including, Valveng, Nghathal, Thingkangphai and and some other places were identified as the localities from where the Myanmar Nationals were reportedly picked up.
The raid supervised and led by top ranking officials in the district has led to the detention of 80 foreigners, including 20 children. All arrested are awaiting their production before the CJM for further remand and investigation, said a source, while adding that the children will be produced before the Juvenile Justice Board.
It is learnt that the police have arranged food and other amenities including medical check-ups for the detained foreigners.
Senior police officials led by the ADG (LO) Clay Khongsai, IG Zone 2 Jayenta and DIG Range 3, Angam Romanus, inspected the places where the suspected foreigners were apprehended from and held a detailed briefing for the district officials.
Earlier, the police conducted similar raids to apprehend Myanmar Nationals wherein about 50 people were apprehended. Due to the absence of jail in the district, they were kept at Sadhbhavna Mandap, Khominthang.
It is not known how the Government will decide on their fate.
The people apprehended by the police today didn’t speak any of the local languages and they are distinct from the local people as they didn’t ditch the Myanmar culture and dresses. Most of them are engaged in handloom related works, said a source.
The police, it is learnt, have also taken the statement of several people believed to have been responsible in providing them shelter and work. The details however are not known as the visiting police officials as well as the district police refused to release any further details.