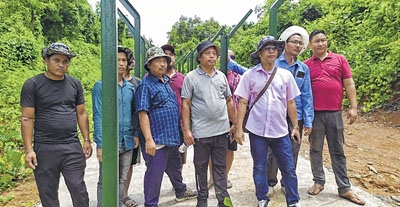 Our Correspondent
MOREH, Jun 29 : Taking strong exception to the alleged stoic silence maintained by MoS for External Affairs RK Ranjan amidst the tight vigil kept on the border fencing work to protect the territory of Manipur, president of United Committee, Manipur Joychandra Konthoujam today bemoaned that nothing could be more disappointing than this.
The UCM leader made this observation while checking if work between Border Pillar number 80 and 81 has been suspended or not. The work is being taken up by the BRTF and the work was found suspended as assured by the Chief Minister earlier.
Speaking further, Joychandra said that people of Manipur rejoiced when Dr RK Ranjan was appointed as a Union MoS and all were under the impression that border issues would be settled once and for all. However that aspiration has come crashing down, he said and expressed disappointment at the complete silence maintained by Dr RK Ranjan so far.
Recalling the protest, Joychandra reminded that it was to pile the pressure to suspend the border fencing work that a protest was staged in front of Kangla on June 21. The protest continued on June 22, he recalled and added that it was in the evening of the same day that Chief Minister N Biren assured a team of the UCM that the Centre would be asked to suspend the fencing work.
It is to keep abreast of the situation that the UCM decided to conduct a surprise check at  Border Pillar 81, said Joychandra.
Until all issues are worked out and the territory of Manipur is assured, all fencing work along the border should stop, he said and added that the UCM will stick to this stand for all times to come.
The question of what is disputed area and what is not between Border Pillar 79 and 102 should be resolved first, he added.
Only when a thorough study is conducted and the Government is in a position to declare what are the disputed areas and what are undisputed areas, should the fencing work resume, he added. No type of any fencing work will be allowed to be taken up in disputed areas and the UCM stands firm on this, added Joychandra.
General secretary of UCM, Ngangom Deva urged all the people not to disrupt or cause disturbance to the work taken up by the Committee and others to safeguard the territory of Manipur. It makes no sense all to decree that permission of so and so will be needed to enter any area at the border, he said and added that safeguarding the boundary of Manipur is in the interest of everyone.