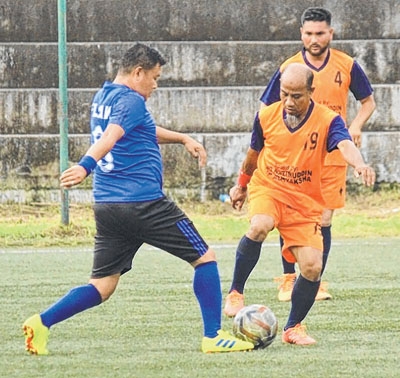 By Our Staff Reporter
IMPHAL, Jun 3 : ATVFA, Thangmeiband qualified for 4th Sangai Trophy Veteran Football Championship quarter finals as Group A winners. FLAM, Yaiskul in the meantime finished second to join ATVFA in the quarter finals from the same group.
In their penultimate Group A league match staged today, ATVFA rode on dazzling scoring performances from Ngamkholen and Khupneingam to secure the emphatic win.
The Thangmeiband side entered into the break with a 4-1 lead and pumped in 6 more goals in the latter half of this very one sided encounter.
Ngamkholen opened the floodgate as early as 2nd minute into the game and grabbed his second in the 17th minute of the match. M Devananda then made it 3-0 by adding another in the 21st minute before Ng Inaocha pulled back a goal for TBSFA four minutes later.
Star of the day then Khupneingam ensured ATVFA retain three goal lead in the 30th minute of the match.
Khupneingam picked up the game from where he left and fired home two more goals back to back in the 35th and the 45th minute to complete his treble.
Ngamkholen also rose again to add his third in the 47th minute before Khupneingam added two more goals (53', 55') in quick succession to make it 9-1 completely demoralise TBSFA.
Ngamkholen then took honour to bang in the final nail into the coffin in the 59th minute.
Later in the day, FLAM survived later pressure from VSA to secure a 2-1 win over VSA, Sora. FLAM started on a bright note with AK Mahesh opening the account in the 12th minute and A Jayenta cementing the lead with another goal in the 28th minute of the match.
FLAM rested back in the second half with the comfortable lead but VSA made relentless attempts in the second half and managed to cut the gap by a goal when Md Akbar found the back of the net.
However VSA's bid to pull level failed to bear result as FLAM defence soaked up all three pressure to go home 2-1.