Pressure grows on NSCN-IM to agree to solution 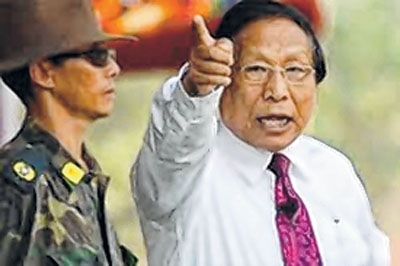 DIMAPUR, Jun 4
In Nagaland, where it occu-pies the singular position of leading the longest-running insurgency in the country, the NSCN (I-M) is used to being treated with kid gloves by parties – a far cry from the criticism that has been directed at it recently by the BJP.
State BJP president Temjen Imna Along recently said in the State Assembly that the NSCN (I-M)’s demand for a separate flag and constitution – one of the intractable points over which the Naga solution is stuck – had been described by Union Home Minister Amit Shah as “unachievable”, even in “400 years”. Last month, Deputy Chief Minister Y Patton, also of the BJP, took it a step further. In a speech at the Central Nagaland Tribes Council in Wokha, Patton said the insurgents did not want a solution, but wanted to “enjoy the comforts of life with money collected as taxes through extortion”.
Then, Kuzholuzo (Azo) Nienu of the Naga People’s Front (NPF), which is a part of the ruling coalition including the BJP, said it was time for the NSCN (I-M) to “take it (the Centre’s offer) or leave it”.
Veteran politician and former Nagaland Chief Minister SC Jamir has been meeting Prime Minister Narendra Modi and Union Home Minister Amit Shah frequently on the issue, ignoring the NSCN (I-M) complaints that he appeared to be siding with them. Recently in Nagaland, Jamir warned of an “impending earthquake”, with its epicentre in Delhi.
The NSCN (I-M) hit back, describing the statements by the political leaders as “outrageous, un-parliamentary and intem- perate”, and accusing them of being carried away by their “election syndrome”. In an emotional speech at an emergency meeting of the NSCN (I-M) on Tuesday, chairman Q Tuccu invoked the long, “six decades of struggle” of the Naga issue, costing “hundreds of thousands of lives”, and said the outfit would not tolerate how certain people were acting after “subtle hints from their Delhi-based political bosses”.
The meeting also reiterated that the NSCN (I-M) would never give up the Naga flag and constitution for the sake of a solution as they “define our political identity”. The Centre has offered to come mid-way: that the Naga flag be used for ‘cultural’ purposes, and that a portion of the Yehzabo (Naga constitution) be inserted into the Indian Constitution. Speaking to The Indian Express, an NSCN (I-M) leader said: “We are not a cultural body or NGO. It (a cultural flag/constitution) is unacceptable.”
However, the recent war of words is a clear indication of the pressure the NSCN (I-M) is coming under for a solution, ahead of the 2023 Assembly polls.
Talks since 1997, when the NSCN (I-M) entered into a ceasefire with the Indian government, have made little headway, despite multiple changes of interlocutors, and even renewed negotiations that led to the signing of the “historic” framework agreement with the Centre under Prime Minister Narendra Modi in 2015 – at the time celebrated as a “breakthrough”.
Since then, seven other Naga armed outfits, under the banner of the Naga National Political Groups (NNPGs), have joined the talks. But while formal talks are said to have concluded in October 2019, they are yet to yield a final agreement. The stalemate further sharpened during the NSCN (I-M)’s fraught relationship with former interlocutor RN Ravi, who was eventually moved out from the post of Nagaland Governor to Tamil Nadu.
Now, the attacks by the BJP and other parties on the NSCN (I-M) indicate a fresh push to solve the issue. The NPF’s Nienu says talks are such a “political hot potato” again because the Centre means “business” now. Led by Assam Chief Minister and the BJP’s Northeast face Himanta Biswa Sarma, the Centre has been trying to resolve the inter-State disputes and insurgencies in the region.
Citing the Government’s stance on the constitution and the flag, Nienu says the offer is a “reasonable middle ground”. “It has been 25 years, and we are fed up. In the name of the ‘peace process’, unlawful activities – threats, intimidation, extortions – have continued,” Nienu says.
Last month, the State Government even ordered that all “police check gates”, except those at inter-State boundaries, be shut to “curb illegal collection of money from the vehicles”.
However, others are worried about the muscle-flexing by BJP leaders. A politician who does not want to be identified questioned the “shooting off their mouths” by the leaders, “under pressure from the Centre”. “The BJP wants to show who is boss,” said the politician.
Chief Minister Neiphiu Rio also advocated caution. Rio, who heads the Core Committee on Naga Political Issue formed last year, comprising all 60 legislators, and has held several rounds of talks with the Centre as well as the NSCN (I-M) was quoted by the PTI as saying: “We are talking to everybody and my point of view is that as facilitators we cannot voice anything. We have to see that they (the negotiating parties) come to an understanding.”
The State’s tribal organisations, too, have weighed in. “We are not part of the peace process, but we want the negotiators to be realistic, and hammer out whatever is possible,” said a Nagaland Tribes Council leader.
A member of the Naga Hoho, the apex tribal body, said while he could not comment on “who is right, who was wrong”, he said it was not entirely fair to blame the NSCN (I-M).
“If one goes by the framework agreement, what the NSCN is asking for is not wrong,” he said.
Across the board, what everyone agrees on is that the sudden scramble to find a solution is directly related to the coming polls.
“Since 1998, every election is preceded by hectic conversation about the peace talks – whether there should be a solution before the election, or election then solution. It is a trend,” said a politician from the State. The Indian Express