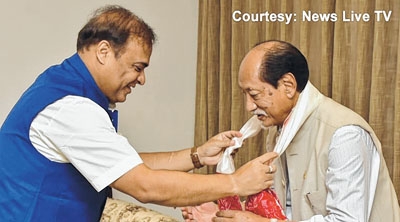 Dimapur, Jun 3
Assam Chief Minister Himanta Biswa Sarma held a crucial meeting with the Nagaland Government's Core Committee on Naga Political Issue, sources said on Friday.
Mr Sarma, the convener of the North East Democratic Alliance (NEDA), arrived in Dimapur on Thursday evening and headed to Niathu Resort in Chumoukedima where the meeting was held in the late hours, they said.
The closed-door meeting was attended by Nagaland Chief Minister Neiphiu Rio, Rajya Sabha MP Phangnon Konyak, and 16 MLAs who are members of the committee, including UDA chairman TR Zeliang, they added.
Assam Minister Pijush Hazarika accompanied Mr Sarma to the meeting.
The meeting continued till late in the night, the sources said.
This was the second time that Mr Sarma visited Nagaland to discuss the Naga Political Issue. He last visited the State in September last year and held an interaction with the NSCN (IM) in the presence of Nagaland Chief Minister Rio.
The Core Committee has sought the support of Mr Sarma as the convener of NEDA to help achieve a solution to the issue by speaking with the Centre.
Mr Sarma had on Wednesday said that it is a complex issue and must be left to the Centre and NSCN (IM) for a resolution.
The Centre has been holding separate talks with the NSCN (IM) since 1997, and the Naga National Political Groups (NNPGs) since 2017. It signed a Framework Agreement with NSCN (IM) on August 3, 2015, and an Agreed Position with NNPG on November 17, 2017.
However, no final solution has been achieved with the NSCN (IM) remaining firm on its demand for a separate Flag and Constitution for the Nagas. PTI