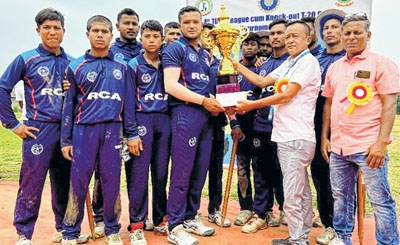 By Our Staff Reporter
IMPHAL, Jun 4 : RCA defeated SYDO by 43 runs to win the title of the 4th TDCA League Cum Knock-Out T20 Tournament organised by the Thoubal District Cricket Association at Moijing Playground.
Aziz Mirza shone in the match as he topscored for RCA before taking a wicket to help restrict SYDO to 80 runs in the chase.
After winning the toss, RCA stacked up a total of 123 runs for 7 wickets in allotted 15 overs (truncated) as Aziz Mirza hit 40 off 32 balls and Syed Hussain and Razzak added 20 and 26 runs respectively.
Sameer MK also added 15 runs in RCA's tally in the innings which saw Rafique of SYDO claim two wickets and Arif Alam managed 1.
In the chase, Rafique scored 35 off 29 balls but his effort went in vain as SYDO succumbed to 80 runs in 15 overs despite having 5 wickets left in the hand.
Mirza, Naees and Aqueel were able to claim a wicket each while maintaining good economy that kept SYDO well below the asking rate throughout the innings.
Eventually, RCA walked away Rs 50,000 richer along with title trophies and a haul of individual honours while SYDO settled for runners up trophy and a cash prize of Rs 30,000. Md Samir of RCA pocketted man of the tournament (296 runs and 7 wickets), highest run getter, most sixes by a player awards worth Rs 5,000; Rs 5,000 and Rs 2,000 respectively.
RCA's Aziz Mirza was also feted with the man of the final match prize worth Rs 2,000 beside winning hattrick wicket takers award worth Rs 2,000 alongside his compatriot Naes Hussan and CAL's Umer Humza.
Zamir of RCA also fetched the best fielder award worth Rs 2,000 with Trophy as Naeem of AMCA and Naes Hussain of RCA were feted with emerging players award worth Rs 2,000 each.
CAL's Md Sarif in the meantime fetched the best wicket keeper award worth Rs 2,000 as AKSDO emerged the best discipline team award of Rs 5,000.