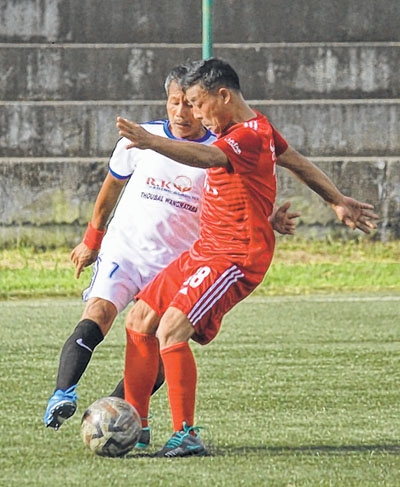 By Our Staff Reporter
IMPHAL, Jun 5 : FC Imphal and SVA, Khongjom Keirak emerged victorious to post their second Group stage (Group B) wins in the 4th Sangai Trophy Veteran Football Championship and confirm their places in the last-8 stage of the competition.
In the 22nd match of the tournament, FC Imphal got off to a flying start with A Dilip netting thrice to give the team 4-1 win over AYVFA, Yairipok.
Dilip opened the scoring in the 5th minute but W Tomba helped AYVFA come to level terms scoring the equaliser in the 9th minute.
Dilip however made sure that FC Imphal retained the lead in the 18th minute before H Subol extended the lead to 3-1 with a clinical strike in the 22nd minute.
A Dilip then scored the decisive goal two minutes into the stoppage time of the opening half (35+2') to make it 4-1.
The win ensured FC Imphal finished on top of Ground B with 7 points on the back of 2 wins and a draw.
Later in the penultimate Group B league match, H Momocha goal in the 7th minute was more than enough for SVA to beat CVFA at Artificial Turf Ground, Lamlong Thongkhong.
With the win, SVA finished second with the same 7 points as that of FC Imphal but with lesser goal count.