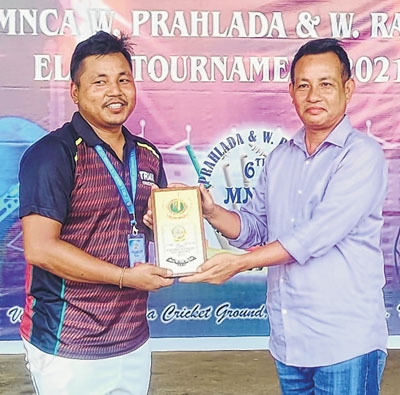 By Our Staff Reporter
IMPHAL, Jun 7 : After almost a month of forced break due to rain, the 6th edition of W Prahlada and W Ramananda Elite Tournament resumed today here at Luwangpokpa Cricket Stadium, Luwangsangbam with TRAU, Kwakeithel taking on MODEL, Chingamakha.
After winning the toss, TRAU chose to field first and chased down a target of 153 runs set by MODEL for the first win in Group A competition with 3 wickets left in hand.
Put into bat first, MODEL had a cautious start and as soon as openers Yumnam Karnajit and Thoudam Deepak managed to forge a 40 run partnership for the first wicket, Karnajit (17) departed in the 4th ball of the 12th over to Anand Naorem who emerged TRAU's wrecker-in-chief claiming three more wickets in the innings.
It seemed to be a complete turnaround of the proceedings as Anand removed Kisan Wahengbam for a 10-ball duck in the penultimate delivery of 14th over reducing MODEL to 42 for 2 and Thoudam Deepak (22) retired hurt in the next over.
Langlonyamba M who came in for the third wicket however survived pressure and made the most of the score adding 44 runs off 54 balls even as he saw wickets of his compatriots tumbling around in quick succession with Anand Naorem and Priyojit Kangabam (2/15 in 8 overs which contain 4 maidens) running through the order.
After a flurry of wickets, Waikhom Priyokumar (14 off 11 balls) and Loukrakpam Superjit (1) held off TRAU's bowling charges to wrap up the innings (40 overs) at 152 for 9.
In pursuit, TRAU had to face a stiff challenge losing 3 wickets within 8 overs including Priyojit Kangabam (19 off 29 balls) all to Loukrakpam Superjit who returned with the best bowling figures of 3/18 in 5 overs.
However, contributions from Bishworjit Nongmaithem (21), Behul Singh (35), Bijenkumar Singh Nongmaithem (20) before Anand Naorem's unbeaten knock of 20 runs was more than enough for TRAU to post a winning 153 in 38.3 overs with three wickets left to spare.
MODEL skipper, Vetesor Sharma scalped twice for 24 runs in 8 overs of this innings after Loukrakpam wreaked havoc early on.
TRAU's Anand Naorem who picked up 4 wickets and scored an unbeaten 20 in the chase was eventually adjudged man of the match.
Al-Ameen, Lilong will play SCCC, Singjamei in the next match (Group B) tomorrow.