Naga peace talks Govt, NSCN (IM) should not back out : Zeliang 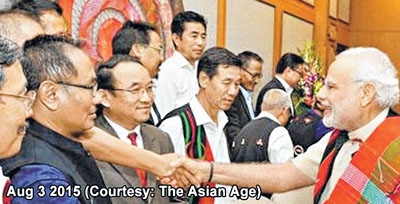 Kohima, Jun 7
The ruling United Democratic Alliance (UDA) in Nagaland has urged the Centre as well as the Naga groups including NSCN (IM) not to back out from what has been committed, in writing and otherwise, during the last 25 years.
The Naga political issue and peace talks faced hurdle over the NSCN (IM)’s repeated insistence for a separate Flag and Constitution.
UDA Chairman and former Chief Minister TR Zeliang said the ruling alliance had conveyed the sentiments of the Naga negotiating groups to the Centre that it should not change its stand from what had been committed to the Nagas through former Interlocutor and Governor RN Ravi and present Government representative AK Mishra.
“The negotiating parties should not back out from what has been committed to each other. With this approach, Nagas can expect that the talks will come to a logical conclusion at the earliest. The ongoing talks so far are positive,” Zeliang said in a video message on Monday.
Referring to various reports in the media and without mentioning the name of former Chief Minister SC Jamir, Zeliang said “loose remarks” made by some Naga leaders based on speculations and hearsay caused misunderstanding and confusion among the Nagas.
“I appeal to all right-thinking Naga leaders to refrain from making unsubstantiated comments. Any lawmakers, public leaders and everyone have the right to speak out for the common welfare of the Nagas.
“However, one must remember that unlike the 1960s when overground groups were part of the (peace) negotiations, it is the Naga Nationalist groups who are part of the negotiations today,” he said.
The former Chief Minister said as the undivided armed group, the Naga National Council was not consulted prior to the signing of the 16-Point Agreement in the 1960s by the Centre and the Nagas, the armed conflict continued.
“The UDA Government wants inclusiveness and everyone involved to settle the Naga political issue,” Zeliang said.
He added that any unfounded and unwarranted remarks might mislead the most sensitive peace process.
Jamir is the only surviving signatory of the 16-Point Agreement that led to Nagaland’s creation as a State in 1963. Of late, he had warned of an impending earthquake in Nagaland with epicentre in Delhi.
Appreciating the “genuine” effort of the negotiating parties, the UDA Chairman said one should not believe that the final agreement on this complex and sensitive issue would be inked secretly and imposed on the Nagas.
The Nationalist Democratic Progressive Party is the dominant party of the ruling UDA with the Bharatiya Janata Party, which has 12 MLAs, as one of the important constituents.
Recently, 21 of the 25 MLAs of the Naga People’s Front (NPF) led by Zeliang merged with the NDPP, increasing its strength in the 60-member Assembly to 42.  NE Now