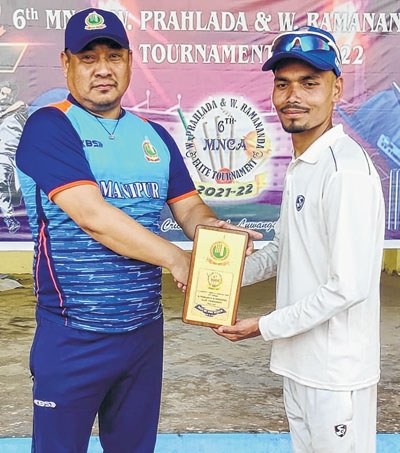 By Our Staff Reporter
IMPHAL, Jun 8 : Al-Ameen, Lilong beat SCCC, Singjamei by 11 runs for the third win in four Group B matches of the ongoing 6th MNCA W Prahlada and W Ramananda Elite Tournament here at Luwangpokpa Cricket Stadium.
Al-Ameen won the toss and opted to bat first. However, their hope of making a good total did not materialise and were bundled out for 115 runs within 31.5 overs as spin duo of Abdul Kasim (3/14 in 8 overs) and Pinkey Singh Sanasam (3/12 in 6.5 overs) ran through their batting line up with ease.
Despite the below par total, Al-Ameen put in an impeccable bowling performance to rip through SCCC batting order and restricted them to 104 runs within 27 overs for the third straight win after opening game snub.
In Al-Ameen's inning, Md Basir Rahman edged to SCCC wicketkeeper Ulenyai Khwairakpam early to get out on 4 off Rakeshwor Republic in the opening over itself.
Al-Ameen further slipped to 39 for 2 in 6 overs as Basant of SCCC caught and bowled Nawaz before Muhammed Al Bashid (21) was removed by Abdul Kasim in the 1st ball of the 10th over reducing the Lilong side to 44 for 3.
Al-Ameen continued to slump as Abdul Kalam trapped Md Nasirshah Alam Nongjaimayum for a golden duck and removed Mustaque Mohammed for 13 to make it 74 for 5 in 15.5 overs for Al-Ameen.
Pinkey Sanasam then set up Md Safwan Khan (1) run out before Basant bowled Boboicha Singh Thokchom out for 20  (in 37 balls) and went on to sweep the tailenders with ease to restrict Al-Ameen to 115 for 10 in 31.5 overs.
Kabir (13) was not out as the innings ended.
Despite exceptional feats from bowlers, SCCC batting department were caught by surprise in the chase as Ulenyai Khwairakpam was got lbw out by Md Basir Rahaman to return to the pavilion on a golden duck.
The Singjamei side team further slumped to 41 for 5 as Rohit Singh Moirangthem (15 off 20 balls), Jaali Ahmed Chisti (11 off 26 balls), Lishan Meitei Khaidem (3) and skipper Sandeep Chakraborty (1) had short stays on the crease as pacer Md Basir Rahman (3/21 in 8 overs), Najarul Islam (4/12 in 8 overs) ran through the first half of the top order.
Basant (18), Pinkey Singh (10) and Phijam Langamba Meitei (13) also tried to anchor but their efforts fell short with Habibullah Ahamed taking honours to snare three remaining crucial wickets to put SSCC chase to the sword.
Najarul Islam of Al-Ameen shone with a four wicket haul was eventually named man of the match.
Blue Hawk, Khurai will play WYC, Wangkhem in the next Group B league match tomorrow.