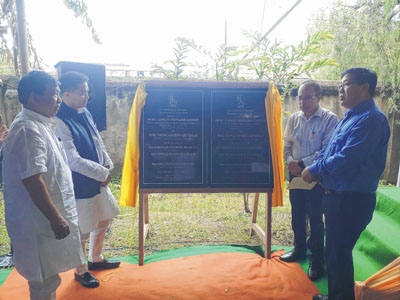 IMPHAL, Jun 30 (DIPR/OSR)
Agriculture Minister Thongam Biswajit inaugurated 150 MT Capacity fertilizer godown constructed under Rashtriya Krishi Vikas Yojana (RKVY) at the District Agriculture Office Complex in Imphal East and Thoubal districts
The inaugural function was organized by the Department of Agriculture, Government of Manipur.
Speaking as the chief guest Thongam Biswajit said that RKVY was implemented in the State in 2009-10 with seven allied departments even though it was launched in 2006-07.
Stating that the Government is trying to utilize the funding under RKVY scheme in a more creative and innovative way, he said that the funds allocated centrally should be able to meet the requirements of the State and so the guidelines which are not applicable to the State needs to be discussed.
'We can propose to the Centre on the feasibility of the scheme and take the responsibility for implementing the scheme differently', he added.
The Minister said that the implementation of the RKVY scheme is far from the target achievement and so the Government will try to increase the budget after making a tentative programme.
He emphasised on the importance of  producing organic crops and maintained that the easiest way to achieve the target is to use vermicompost.
Imphal East District can be a model for successful implementation of the pilot project for utilization of vermicompost that can be expanded to all the districts and it can be distributed to the farmers at a subsidized rate. There will be a vermicompost unit in Imphal East district soon for achievement of the Government scheme, he said.
He also assured that he will urge the Government to take up steps to develop infrastructure, human resource and financial resources to run the Agriculture Department in a full-fledged manner and highlighted the need of working in cooperation between various departments to achieve the goals of the Government.
The Minister also maintained that for the successful functioning of the department three resources are a must which are infrastructure, man power and financial power. All these have been discussed with  the Chief Minister for smooth functioning of the department, he said.
Speaking about the distribution of urea/fertilizers to farmers, he said 'The distribution is not based on land patta document  but it is distributed to the genuine farmers after proper verifications are done.
Mongjam Joy Singh, IAS, Commissioner (Agriculture) stated that the 150 MT Godown is constructed with a total cost at Rs 80 lakhs, funded under the RKVY for the year 2020-2021.
He further said that Crop Insurance Week campaign will be flagged off on July 1, 2022 at Director’s office chamber to be participated by all the District Extension Officers (DEOs).
DEOs will campaign for a week in 75 blocks in different districts, including the Aspirational District - Chandel.
Insurance companies, banks and stakeholders related to Pradhan Mantri Fasal Bima Yojana (PMFBY) will be sensitized during the campaign, he added.
Kh Ibomcha, MLA, Lamlai A/C; N Gojendro, Director, Agriculture Department; L Doungel, DAO, IE; officials and staff of District Agriculture Department and invitees attended the inaugural function.