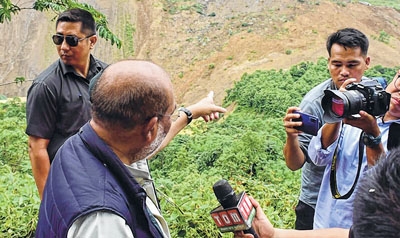 Imphal, Jun 30 (DIPR)
Chief Minister N Biren Singh today visited Tupul railway construction camp, Noney where a massive landslide occurred last night leaving several casualties and dozens buried alive.
Speaking to media persons, Chief Minister N Biren conveyed his deepest condolences and shared grief with the bereaved family members.
He informed that an emergency meeting was held this morning and the Government decided to provide ex-gratia of Rs 5 lakh to the next of kin of those deceased and Rs 50,000 to the injured persons.
He further maintained that all the expenses including medical treatment etc of the injured persons will be borne by the State Government.
Mentioning that the rescue work is underway, he said that the rescue team comprising of Manipur Police personnel, SDRF, army personnel etc are being deployed in the area.
The Chief Minister also interacted with the people of the nearby area and expressed his gratitude to the villagers for extending their support and co-operation in the rescue mission.
MP Rajya Sabha Leishemba Sanajaoba, Chairman of Hill Areas Committee D Gangmei, Chief Secretary Dr Rajesh Kumar, administrative secretaries, senior Army and Manipur Police officials and others accompanied the Chief Minister during the visit.
GOC-in-C Eastern Command Lt Gen RP Kalita and GOC Spear Corps Lt Gen RC Tiwari moved to the incident site and took stock of the rescue efforts.
Meanwhile Governor La Ganesan has condoled all the families of the victims killed by the landslide.
Saying that he was shocked on hearing the sad news of the catastrophic landslide, the Governor wished speedy recovery to all the injured victims. The Rongmei Naga Youth Organisation Manipur and the Rongmei Naga Students Organisation have also expressed shock and deep anguish over the tragic landslide. They have also conveyed solidarity to all the bereaved families.