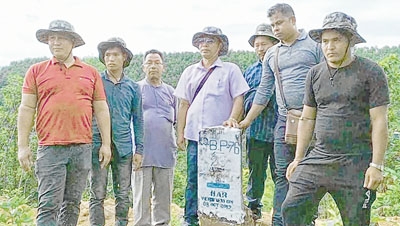 Our Correspondent
MOREH, Jun 30 : Members of the United Committee Manipur (UCM) inspected the disputed border fencing at border pillars 76, 77 and 78 in Haolenphai village and Moreh respectively  along the Indo-Myanmar border yesterday.
This was done as part of UCM's ongoing fact finding mission with regard to the territorial boundary of Manipur along the Indo-Myanmar border.
Reportedly, Joychandra Konthoujam, president UCM and  Ngangom Deva, general secretary UCM led a team on the first leg of their journey to inspect the border fencing at border pillar 76 in Haolenphai village which is located roughly 3 kilometres away from Moreh.
Haolenphai village chief Lalkholun also joined the team during the inspection.
Speaking to media persons, Lalkholun said village elders had said that border pillar 76 was reportedly a new pillar which had been erected one kilometre deep into the territory of Manipur. Interestingly, he added that this pillar was markedly different from the order border pillars that had been erected.
Following this, the team went on to inspect border pillar 77 located near Moreh Land Custom Station and border pillar 78 located near the Tamil temple Shree Angala Parameshwori Shree Muneshwarar.
Representatives of Tamil Sangam Moreh also joined the team during the inspection.
KBS  Maniam, trustee Shree Angala Parameshwori Shree Muneshwarar temple, shared that Myanmar had taken over another temple in the past and forbidden people from entering the premises of said temple. Further, he cast aspersions on the legitimacy of border pillar 78 claiming that the actual pillar had been lost for many years and some unknown persons had erected this one without anyone's knowledge.
Joychandra Konthoujam also spoke to media persons and stated that border pillar 78 had been erected 80 metres deep into Manipur territory as previously shared by authorities of Tamil Sangam. He also said it was the solemn duty of the people to safeguard the territorial integrity of the State.