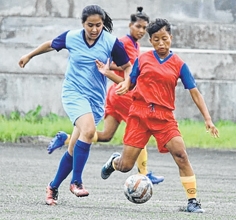 By Our Staff Reporter
IMPHAL, Jul 9 : Madhumati Government High School, Bishnupur will lock horns with Wangoi High School in the ultimate clash of the State Level Subroto Mukerjee Football Tournament for U-17 girls organised Department of Youth Affairs and Sports, Government of Manipur.
Madhumati Govt HS reached the final with a 4-0 rout of Bukpi Govt HS today in the first semi-final match.
The Bishnupur team cruised to a 3-0 lead in the first half after a dominant start thanks to goals from Th Kethabi (13'), O Babita (16'), O Retika (26') before I Priyadarshini banged home the final nail in the 46th minute.
Meanwhile the second semi-final match between Imphal West's Wangoi HS and Imphal East's Free Progress Academy was a neck and neck competition and the two sides were tied at 1-1 before Imphal West team won 5-4 on penalties.
It was K Anju who gave Imphal East team the lead and 1-0 first half lead after 12 minutes but Wangoi HS pulled level in the 49th minute thanks to Thoibisana's goal.
The two sides remained unseparated till the end of regulation time and eventually the winners were decided via tie breaker.
In the shoot-out, Menaka, Kimte, Remi, Thoibisana and Reena were on target for Wangoi HS while only K Anju, M Roshibina, Mangpinem and N Arina found the net from the spot for the Imphal East team.
The final match starts at 2 pm.