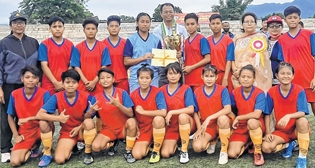 By Our Staff Reporter
IMPHAL, Jul 10 : O Babita's treble for Madhumati Govt  High School went in vain as Imphal West's Wangoi High School snatched a late goal to seal a 4-3 thriller and claim the title of the State Level Subroto Mukerjee Football Tournament for U-17 girls organised by Youth Affairs and Sports, Government of Manipur.
With the win, Wangoi HS will be representing the Manipur U-17-girls team in the 61st Subroto Cup International Football Tournament due to be held in September-October period.
It was an entertaining start with both teams exchanging a series of runs as both sides looked to settle down to a good rhythm and clinch the State title.
The Bishnupur side enjoyed slight edge in terms of possession and number of chances created and deservingly took a 1-0 first half lead thanks to O Babita freak second minute goal and as attempts of Wangoi HS girls either went wide or were tackled off well by Madhumati Govt HS defence wall.
After being denied for a while after the second half as well, relentless Wangoi HS managed to pull level via T Thoibisana after 37 minutes.
With the morale boosting equaliser, Wangoi HS looked to gain control of the possession and T Thoibisana was at it again  completing her double in the 41st minute to overturn the lead in Wangoi HS's favour.
Madhumati Govt HS after being snubbed for a while clawed back into the game with O Babita finding her second after 45 minute but the parity failed to last long as L Menaka broke the deadlock with a clinical strike in the 53rd minute.
O Babita, who was in sublime form, netted her third goal in the 56th minute to make sure Bishnupur side remained in contention.
The remainder of the game saw both sides struggling to make difference by creating frantic chances and the regulation time almost ended in a 3-3 draw but N Nandeshori scored a last gasp goal during the stoppage time (60+1') to guide Wangoi HS to a 4-3 win.