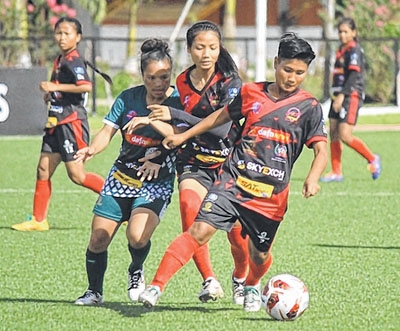 By Our Staff Reporter
IMPHAL, Jul 11 : Arunachal Pradesh Tigers rode on Kai Rumi's brace to rout Assam Rhinos 3-0 for the third win on the trot in the 1st North East Women's Football League Tournament being underway at SAI ground, Takyel.
Kai Rumi who had scored as many as three goals in the previous two matches, continued with her sublime form and scored twice back to back in the 56th minute and 58th minute after a dull opening half to give Arunachal Pradesh Tigers a 2-0 lead.
Yumlam Lali who had also scored twice in Arunachal Pradesh's 3-1 beating of Meghalaya Leopards then banged in the her and team's third goal in the 59th minute to put Arunachal Pradesh Tigers in a comfortable position today.
Assam Rhinos, who had carved out a 3-2 win against Tripura Pythons in the previous match remained clueless the game throughout and had to see out the game without any significant attempt.
Later in the 10th match of the tournament, Tripura Pythons rallied back twice to salvage a 2-2 draw with Meghalaya Leopards.
Meghalaya had a positive start to the game and were 1-0 ahead till the break with Iawanglang finding the breakthrough goal after 24 minutes.
Tripura Pythons upped their ante to regroup well after the break and eventually made their way back when Sakchanti Reang scored the equaliser in the 57th minute.
The parity however was short lived as Nisilia Majaw scored her fifth goal in the 61st minute to help Meghalaya Leopards regain the lead.
Meghalaya Leopards' dream of securing second win in the tourney was broken when Dhanita Reang pulled level for Tripura Pythons with a clinical finish in the 76th minute.
Tomorrow's matches
Tripura Pythons vs Sikkim Pandas from 12.30 pm
Assam Rhinos vs Manipur Sangais from 3 pm