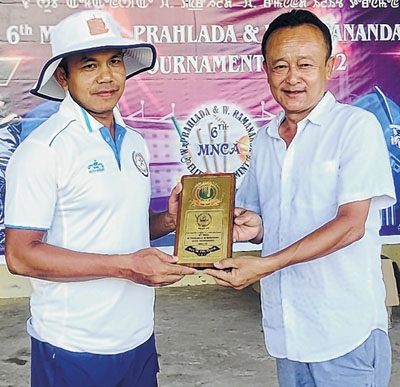 By Our Staff Reporter
IMPHAL, Jul 11 : REYS, Nagamapal defeated CRAU, Khamnam Bazar by 3 wickets today to end their 3-game losing streak in the 6th MNCA W Prahlada and W Ramananda Elite Tournament Group A competition.
CRAU who lost to PTRC in the previous match, were toss winners today here at Luwangpokpa Cricket Stadium, Luwangsangbam and elected to bat first. They faced a tough time from the start and were eventually bowled out for a modest total of 160 runs in 37.5 overs (40 overs an innings) by disciplined bowlers of REYS before the latter team chased down the target in 38.1 overs with three wickets left in the hand.
CRAU, who had slumped to two successive losses after opening match win against FORCE, Kshetrigao, began their innings on a sour note losing I Nikhil on 3 to Nanao Laishram for the first wicket but Khangembam Bimol and Sanatomba K soak up some pressure to forge a 42-run second wicket partnership before Bimol (15) was caught and bowled by Kiran Laishram in the 15th over.
Alfred Hmar then removed Sanatomba K (21) for the third wicket in the next over to reduce CRAU to 57 for 3.
CRAU's slump continued with Alfred Hmar removing Mehtab Jamal (16) in the 20th over before Ayekpam Amitkumar was run out on 2 in the 22nd over.
Kiran Laishram then bowled out Potshangbam Ronil (22) and Takhellambam Kala (10) to complete his three wicket haul and restrict CRAU to 106 for 7 in 27 overs.
Ph Jodash then got run out for 10 before Yungkham Romario Roy swept the tails Lamabam Ajay (15) and Heishnam Joyhenba (13) to finish with bowling figures 6.5-0-18-2 (2 wickets for 18 runs in 6.5 overs).
In reply, REYS rode on Naoshekpam Manglemba's 81-ball 42 and a half century knock by Sagatpam Jayanta (52 off 79 balls) to post a winning 164 and handed CRAU third loss in the tournament.
Lamabam Ajay Singh trapped Mintu Chandra lbw for a 7-ball duck to make it 3 for 1 in 3.1 overs before Naoshekpam Manglemba and S Jayanta gave in a brilliant 100 run second wicket partnership before S Jayanta was removed by Sanatomba K in the 28th over.
Manglemba was then bowled out by Mehtab Jamal in the third delivery of the 29th over which also saw Kiran Laishram getting run out on 8 as CRAU looked to tighten their grip.
REYS also lost Robertson cheaply on 3 in the 30th over as the scoreboard read 119 for 5 before Alfred Hmar got run out on 5 for the 6th wicket.
Daniel (22) and Bipinkumar Langpoklakpam (15 not out) then gave a late flourish to steer REYS to 164 with 3 wickets left to spare.
Sagatpam Jayanta who scored a half century in the chase was eventually adjudged man of the match.
WYC, Wangkhem will play SCCC, Singjamei in the next match (Group B) tomorrow.