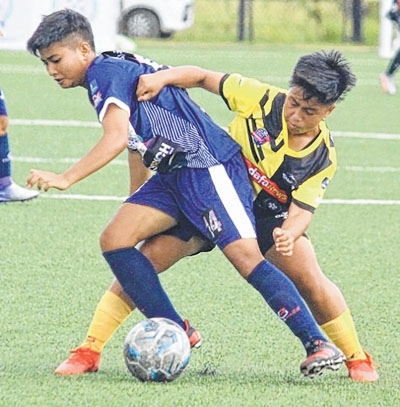 By Our Staff Reporter
IMPHAL, Jul 12 : I Prameshwori and Y Kiranbala netted hat-tricks to guide Manipur Sangais to a 10-0 demolition of Assam Rhinos in the 1st North East Women's Football League being underway at SAI Ground, Takyel.
Manipur Sangais who were held to a uninspiring goalless draw with Sikkim Pandas in the previous match came out all guns blazing from the word go to take a comfortable 7-0 lead in the first half before completing the 10-0 rout.
I Prameshwori opened the floodgate early in the 5th minute before adding two minutes later to double the advantage. Y Kiranbala carried forward the onslaught adding the team's third in the 13th minute before I Premeshwori rose again to complete her hattrick in the 16th minute.
The scoring spree continued with N Priyanka and S Rinaroy scoring a goal apiece in the 20th and 24th minutes before Y Kiranbala struck her second in the 33rd minute to put Manipur Sangais 7-0 ahead and leave Assam Rhinos in the lurch.
After the restart, A Roja hit a brace (41', 45') to further extend the lead before Y Kiranbala rounded off the scoring in the 51st minute.
Earlier in the 11th match, Sikkim Pandas beat Tripura Pythons 2-0 for the second win in three matches.
The two sides had a cautious start to the game and cancelled out one another until Luxmi Tamang found the breakthrough goal after 36th minutes to give Sikkim Pandas a 1-0 first half lead.
It was a similar affair after the restart as well before Lako Phuti converted a fine change in the 64th minute to make it 2-0 in favour of Sikkim Pandas.
As Tripura Pythons who are yet to open their winning account failed make their way back despite few late chances and eventually the Sikkim women cruised home 2-0.
Sikkim Pandas will face off against Nagaland Wild Hogs tomorrow from 12.30 pm tomorrow before Mizoram Black Bears take on Arunachal Pradesh Tigers.