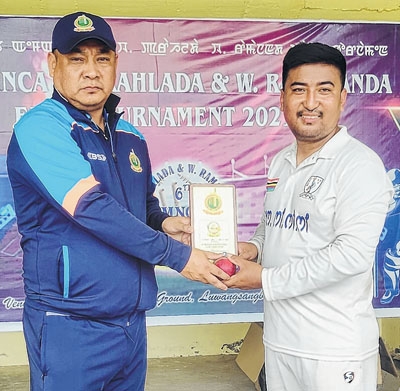 By Our Staff Reporter
IMPHAL, Jul 12 : SCCC, Singjamei survived relegation to Super Plate Group with a 52 run thrashing of WYC, Wangkhem in a crucial Group B league match of the 6th MNCA W Prahlada and W Ramananda Elite Tournament being organised by Manipur Cricket Association here at Luwangpokpa Cricket Stadium.
The two teams, having lost the four of four previous matches, only needed a win to keep themselves in the Elite tier and SCCC emerged the luckier side as they bundled WYC out for 56 runs in 20.3 overs after posting a lowly target of 109 runs today.
Electing to bat first, SCCC were bowled out for 108 runs in 33 overs as Thoudam Rohit of WYC wreaked havoc on the way to his four wicket haul and Khundrakpam James struck twice.
Lishan Meitei (20) topscored for SCCC in their innings followed by Jaali Ahmed Chisti (15), Abdul Kasim (13), Heman Luwang Thounaojam (12) and Basant (12) as they other had to depart on single digit scores in their names.
Despite, bowling department's exemplary performance, WYC failed horribly in the chase and slumped to a paltry 56 total to squander their chance to remain in Elite tier as Abdul Kasim broke the back of their batting line up with a rare five wicket haul.
After, openers Wangkhem Shamungou and Ruhit Nongmaithem were bowled out on ducks, Thokchom Momocha tried to anchor but ended up adding 23 runs off 41 deliveries before Abdul Kasim (5 for 15 in 7 overs which include 3 maidens) and Sandeep Chakraborty (2 for 9 in 4.3 overs) ran through the batting line up to wrap up the innings within 20.3 overs.
Eventually, Abdul Kasim who scalped five wickets and contributed 13 runs was named man of the match.
CHAMP, Khagempalli will play CYCLONE, Thang-meiband in the last Group B league match tomorrow.