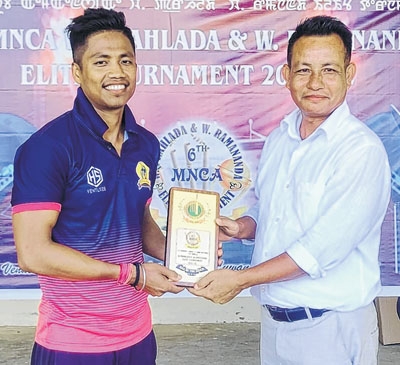 By Our Staff Reporter
IMPHAL, Jul 13 : L Kishan Singha shone with both bat and ball to help CYCLONE thump CHAMP, Khagempali by 132 runs for the fourth win and climb atop 6th MNCA W Prahlada and W Ramananda Elite Tournament Group B table.
L Kishan impressed all at Luwangpokpa Cricket Stadium today with a brilliant knock of 98 runs on the back of 7 fours and 3 sixes to ensure CYCLONE post a modest total of 203 runs for 5 in 40 overs and clinched four wickets to fire his team at the top and help book a semi-final ticket.
CYCLONE elected to bat first after winning the toss but suffered an early jolt losing openers cheaply within 7 deliveries of the innings- Jenpu Kamei (0) to Md Ahsanul Kabir and Narsingh Yadav (1) to Moiranthem Thomas.
Longjam Ronald and Kishan Laishram, however turned things around by forging a memorable 134-run third wicket partnership before Longjam Ronald (49) holed out to Ch Bonny on Sougrakpam Shangkar's 2nd delivery in the 31st over.
As CHAMP bowlers failed to make further inroad, Kishan Laishram kept things alive with the help of Bikash Singh (37) playing second fiddle but had to sadly depart to Moirangthem Thomas when he was just two runs away from making a ton in the last over (40th).
Paul Zomi (8) and Kabrambam Homendro (1) were on the crease CYCLONE wrapped up the innings.
In reply, CHAMP who had opened their winning account against SCCC, had worst start and eventually succumbed to 71 all out within 25 overs as Loktongbam Santosh Meitei (3 for 22 in 8 overs) and Kishan Laishram (4 for 7 in 6 overs which include 1 maiden) wreaked havoc across their batting line up.
CYCLONE's Bikash Singh found the breakthrough in the 3rd over removing Sougrakpam Shangkar on 2 before Loktongbam Santosh dismissed Chingangbam Bonny (8) and caught and bowled Nitesh Sedai for a 3-ball duck both in the 10th over to reduce CHAMP to 25 for 3.
Kishan Laishram then got rid of Leikhram Johny for the fourth wicket before Santosh completed his three wicket haul by dismissing Samir (16) in the 14th over.
CHAMP's slumped continued as Moirangthem Thomas (5) and Nongthombam Gulson (8) also had short stay on the crease before Kishan Laishram swept the tails including two- Lairenjam Ansh and Thingbaijam Nicholson on duck before removing Md Sultan Karim on 23 to set up the big collapse.
Eventually, L Kishan Singha was adjudged man of the match for his all round performance.
With the REYS vs FORCE match earlier scheduled tomorrow being postponed on July 18 due to ground unavailability, CRAU will play MODEL in the next match (Group A) on July 15.