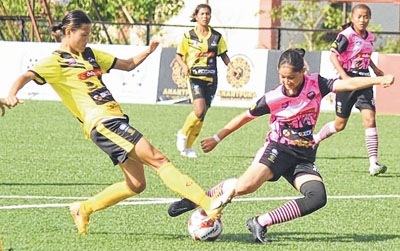 By Our Staff Reporter
IMPHAL, Jul 13 : Manipur Sangais notched up a 2-0 win over Mizoram Black Bears as Sikkim Pandas cruised to 4-1 win against Nagaland Wild Hogs in the ongoing 1st North East Women's Football League today at SAI ground, Takyel.
In the 13th match of the tournament, Sikkim who have been unbeaten in the tourney in the last three matches, carried forward their momentum and raced to a 2-1 lead in the first half before pumping in two more goals for en route to a 4-1 finish against Nagaland Wild Hogs for the third win in four matches.
Luxmi Tamang broke the deadlock in the 20th minute after a series of opening exchanges  but Nagaland Wild Hogs made their way with Mhasikhonuo finding the equaliser in the 38th minute.
The parity however did not last long Naocha put Sikkim Pandas ahead yet again the very next minute. The Sikkim side picked up the game from where they left after the break and it was Lako Phuti who extended the lead to 3-1 after 53 minutes before Pusparani banged in the decisive goal in the 58th minute.
Elsewhere in the second match of the day, a second half brace by N Priyangka earned Manipur a 2-0 win over Mizoram Black Bears.
After a lacklustre first half, N Priyangka ended the goal drought in the 73rd minute before scoring another during the stoppage time (80+1').